What if Euell Gibbons and Julia Child Had a Fling 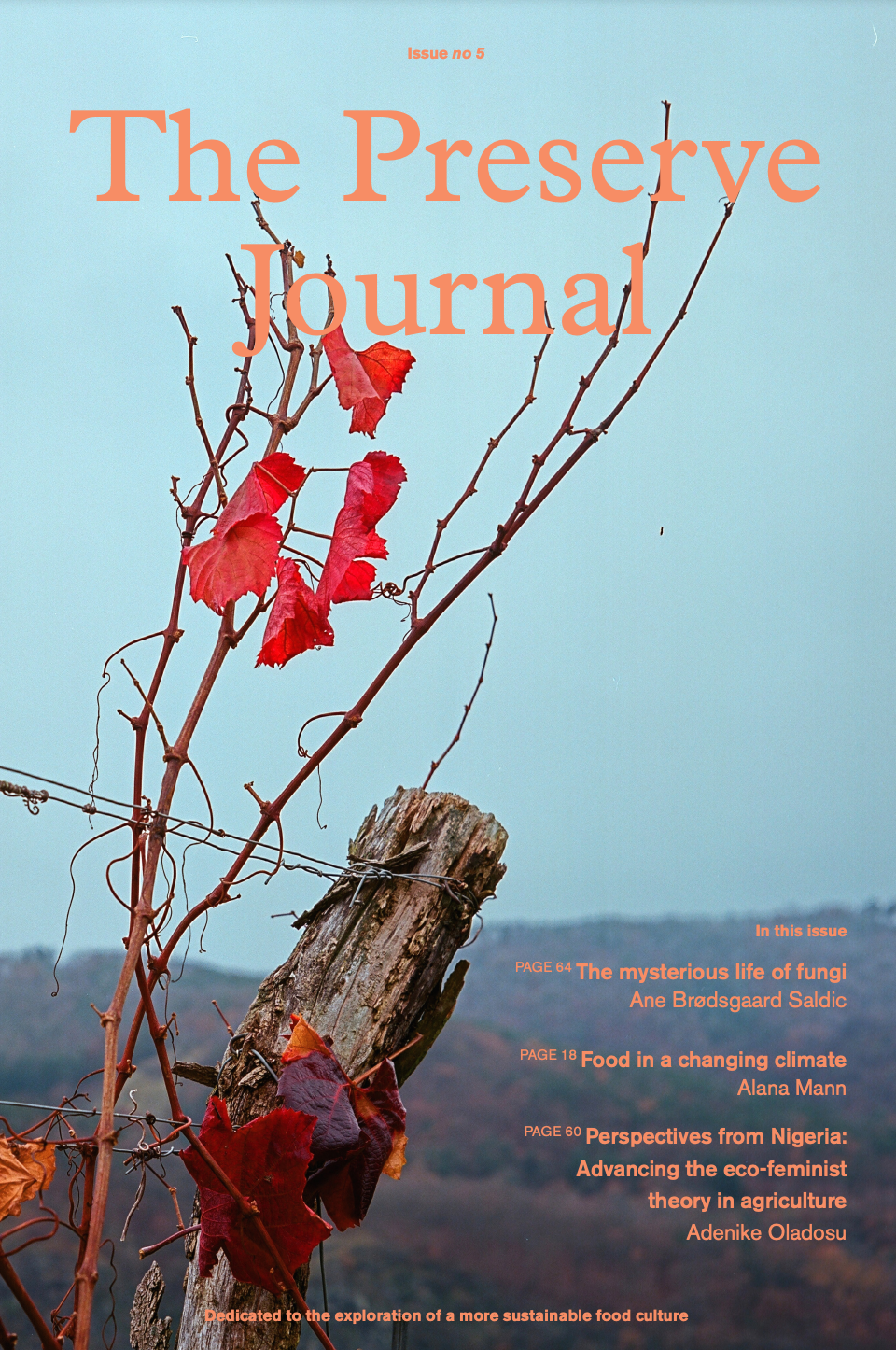 Imagine Euell Gibbons and Julia Child meeting for the first time in a California winery tasting room. In the blink of an eye, the passion between them became so intense that it threatened to curdle the cabernet. What they thought would just be a one-night stand at a nearby B&B turned into a lost weekend which soon morphed into a three-year sojourn at a Marin County commune. But before the inevitable split—reportedly over the soon-to-be world-class chef’s refusal to incorporate the world’s most famous forager’s roadside gleanings into her gourmet dishes—they birthed several love children who went on to found The Preserve Journal

As shocking as the creation story may be, this utterly charming magazine, founded by an internationalist band of twenty-and thirty-somethings and produced in Denmark, Germany, Lithuania, and the Philippines, owes a debt of gratitude to Euell, Julia, and a host of other foodie iconoclasts. Between its sumptuous covers you’ll find stories about wine-making in Brazil, African American cuisine, food sustainability and social justice in the Philippines, winter food foraging, food deserts and city farms. (Full disclosure: Out of deference to their elders, I suspect, they have also allowed the occasional contribution by this writer).

Thumbing through each edition’s 120-plus pages, replete with articles about more food system quirks and kinks than I’ve ever imagined, I feel a freshness I haven’t experienced since reading the Village Voice for the first time in 1969. Though it replaces New York City brashness and cheekiness with a decidedly northern European grace and earnestness, it retains just a hint of the amateurish to remind you that good food system reporting bends toward diversity and democracy.

It’s easy to imagine, for instance, a group of highly caffeinated young people throwing deadlines and stylistic consistency to the wind in favor of giving everyone a voice. As rough as some of its edges may be, The Preserve is singularly dedicated to making food sustainability and justice a global reality. Yet, it does so in a politically understated way; one never gets the sense that the food sheriffs are riding into town on their high horses to judge the content of your larder. The editors and writers can do that—their politics, if anything, is anti-capitalism—but they recognize, thank God, that the infinite expressions of Earth’s creations and humankind’s genius for managing those gifts are worthy of celebration. They genuflect toward pleasure and social responsibility, asking in the words of the Nobel-winning Danish novelist, Henrik Pontoppidan, why anyone should be asked to “swear fidelity…to the cross or champagne.” The Preserve simply responds that they’ll choose both

Deliciously eclectic, The Preserve’s issues are only designated by a number (e.g., “Issue no. 4”) and the season, as in the stories for an issue were “collected during the seasons of spring and summer.” There’s never a year associated with an issue, and the contributors, lacking the usual face shots, barely get a by-line and a website or a hashtag next to their name—not an easy kind of semi-anonymity for this egotistical American writer to accept. In fact, extreme modesty pervades every aspect of The Preserve. Not only are anthropomorphic constructs such as dates and authors’ nationalities intentionally ignored, the magazine’s creators and their identities are barely revealed.

The group of imagineers who have been assembling The Preserve since 2018 are Michelle Skelsgaard Sorensen (Founder and managing editor), Sebastian Reichmann, Meg Yarcia (editor), and Marie Dossing (lead designer). The magazine is entirely subscription supported and accepts no advertising or sponsorships. None of the staff or writers are paid a single Euro for their work, and the staff take on a variety of day jobs to support their magazine management habit

Extracting even a modicum of biographical information from the deeply humble members of this entirely volunteer team was not easy. But typical among them is Michelle, 28, Danish, formerly a professionally trained chef, now a university student of Human Geography. She earned her culinary chops at Copenhagen’s renowned Restaurant Relae, which embodies the “new Nordic cuisine” and has been described as “the most sustainable restaurant in the world.” In sharing her inspirations for founding The Preserve, Michelle notes the “many hunting trips I went on with my dad as a small child, smelling the scents of the place, and my dad by my side telling me that ‘we’re not here to shoot, we’re here to take part in the awakening of the forest.’” She describes “these memorable moments of sensory delight and deep intimacy with the world” as the wellspring for the “love that I am expressing and exploring through The Preserve.”

The writers are from all over the world, as best as one can tell, and they travel the world stalking interesting food stories. The entire magazine is published in English even though the staff and writers are often fluent in many tongues. In keeping with their idiosyncratic (some might say stubborn) approach to publishing, The Preserve is only available in print (the subscription prices and options, including ordering information are available on their website, as is a list of magazine shops that stock The Preserve). But given that the staff are from a generation for whom social media is its daily bread—to say nothing of the fact that this is a magazine with a global distribution—it is shockingly quaint that they are determined to mail their “seasonally” printed publication, to arrive in their subscribers’ mailboxes God knows when. But for those of us who patiently anticipate spring’s lilacs or summer’s first tomato, the wait is worth it

The photos, drawings, tone, and even texture of the magazine have the look and feel of something you would place in your kitchen’s produce bowl alongside the organic apples and eggplant. The cover beckons you the way a well-displayed farmers’ market stand does—you want to pick up an item, check its different facets against the light, sniff, peel, squeeze, and, when no one’s looking, take a small bite.

The Preserve is beautiful to look at and inspiring to read, a testament to the heart and soul of its founders. The manifesto of these earnest young people speaks for itself: “We believe that the practice of attentiveness and care in everyday-life, living…alongside other inhabitants of the Earth within an understanding of our entanglements with and responsibilities to one another…offer concrete resistance to the homogenized, industrialized and capitalistic structures that predominate today’s food culture.” By echoing the words of William Carlos Williams’s “Beauty is a defiance of authority,” The Preserve reminds us that walking into the head winds of injustice and environmental degradation can be a grim slog. With beauty, with the joys of a vibrant and sensual food culture by our side, those steps become much lighter.