A Rainbow of Farmers 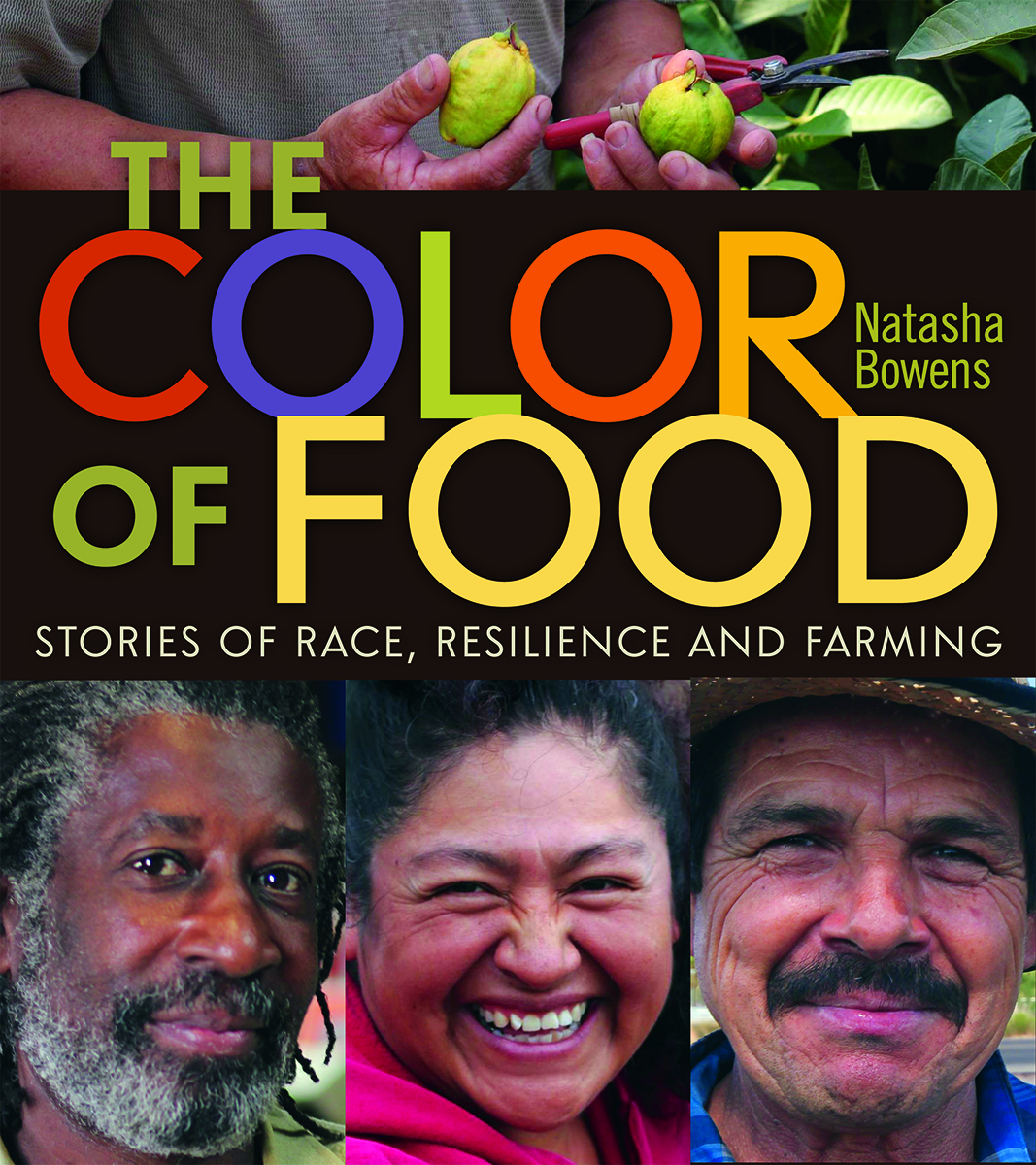 For those of us who still think that food is grown exclusively by 59-year-old white men wearing freshly laundered overalls and John Deere caps, photo-journalist Natasha Bowen’s book The Color of Food may come as a shock. In what can only be described as the classic existential American road trip, Bowens takes us from coast to coast in her trusty automobile “Lucille” in search of roots, farmers of color, and truths hidden in plain sight. Along the way we meet African-American, Latino, Native American, and Asian farmers – not a single one of whom fits any agricultural stereotype known to me.

It’s a story that begins with a young woman of interracial heritage plunging her hands into the soil of a place where she found connection and community. Bowens could have stayed among her fellow communards, or as she put it, “back-to-the-land hipsters” honing her farming skills and adding to the growing bounty of locally produced food. But she chose instead to trade in the dirt ‘neath her nails for a laptop and camera to weave together stories about farmers of color. Her choice will no doubt inspire other young people to respond to their own inner agrarian.

The Color of Food is one of those well-written picture books that works at many levels. It is certainly America’s race story etched across a roughly textured agricultural landscape, where the oppression of 400 years finds contemporary expression. It’s also a tale of Bowens herself, who uses her camera lens to find her way through the lens of a conflicted past to a more hopeful future. It’s the story of places lost and places found, and how peoples ripped from their native lands have rediscovered their identities in new communities. And without a doubt, it’s a tale of the suffocating blanket of the industrial food system and its uncanny ability to suck the life from our souls.

One of Bowens’ gift to us is Daniel Whitaker, a black 93-year-old retired hog farmer from North Carolina, who gives a verbatim account of the medieval practice of sharecropping. “We would make 10 cents a day…but that was the way it was,” he tells us. “Your parents would work all the year and the opposite people [his almost childlike term for white people] would…tell you, ‘you didn’t earn any money this year.’ Those things rested hard on my mind….I knew I wanted to do something different.” And he did just that, clawing his way to the purchase of 314 acres of land where he successfully raised hogs and grew peaches, apples, pears, and corn. Mr. Whitaker passed in 2014.

Fortunately, Bowens is not one of those writers eager to erect a pedestal before she knows who to put on it. She grasps her subjects intuitively and renders them in loving but carefully constructed frames. Her photographic images are strong, and she grants her subjects ample space to tell their stories in their own words. Bowen’s commentary provides just enough connective tissue to maintain an even narrative flow, and enough context so that we can easily see the big picture.

And of course there’s never any doubt which way Bowens’ compass needle points. Leading us into the future with the book’s final chapter, “Generation Rising,” Bowens’ issues what might be read as her generation’s agro-ecological manifesto: “We refuse to settle for anything less than transformation and what we think is just. My hope is that this willpower…will truly revolutionize not only the food system, but the way we live on this planet.”

We see the embodiment of that will in the struggle of young, landless farmers of color Christina and Tahz Rivera-Chapman of Tierra Negra Farms. Experimenting with different forms of farming on various parcels of borrowed land, they cobble together a livelihood from off-farm jobs to sustain their burning desire to farm full time. Their frustration and growing rage becomes palpable when Christina speaks of trying to work “within the framework of money and capitalism – which we know is explicitly trying to screw one group over another.” But their frustrations with a system that doesn’t help beginning farmers has led them to an alternative plan to secure communally owned farmland. Their dream is to work with several young farmers of color to collectively pursue common agricultural goals while also forging bonds between generations of farmers.

Though I believe that a healthy dose of subjectivity is sometimes necessary to ensure a writer’s objectivity, I did find myself bridling at times over Bowens’ repetitious exuberance. Her too-frequent descents into diatribe as well as overstated assertions unrestrained by facts did leave me huffing and puffing on more than one occasion. But over time, I am sure, Bowens will learn to trust her pen and pictures sufficiently to let the reader find their own conclusions. In the meantime, one would have hoped that a strong editor might have curtailed the author’s excesses.

That being said, I will put aside my critic’s hat to state that we must listen to authentic rage, even when it is not filtered by analysis or supported by citations. It’s not always the absolute truth or the reliability of the data that matters, but the sense of truth as expressed by the speaker. Bowens courageously wades into territory that is heavily mined with emotion and scarred by some of the worst abuses in North American history. She should be praised for revealing the grace and resilience of the wounded and their children and the children of their children.

I found myself wondering out loud why, in the face of unrelenting oppression, that The Color of Food characters didn’t either run, or, running out of patience, stand and fight what would have been a suicidal battle. The only answer that makes sense to me is that the roots of farming go so deep into the land that they draw on enormous reservoirs of strength, and that the love of place is an instinct that can buffer us against the worst impulses of revenge. Bowens’ stories are first and foremost a triumph of humanity over racism, and a victory, related through numerous tales of pain and struggle, that we the alienated nomads of the 21st century might well heed.