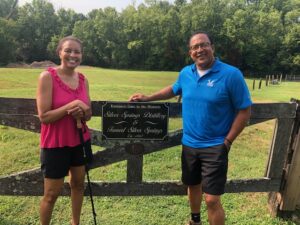 Crossing the Mississippi River is always a thrill for me—so much water, so much power, so much history! The best place, of course, to leap across the Big Muddy is Hannibal, Missouri, the boyhood home of Samuel Clemens/Mark Twain, and his inspiration for my all-time favorite book The Adventures of Huckleberry Finn. Acknowledging the volumes of argumentation about what Huck and his relationship with the runaway slave Jim means for racial issues today, I still have not found a better literary jumping off point for the encounter between innocence and our nation’s raw racial realities. Standing atop a dyke on the Missouri side, I saw the river’s stray, floating logs, and I imagined them lashed crudely together, bearing a white boy and a Black man talking of hope and freedom while trapped in an inescapable current of violence and oppression.

From that place and after crossing Illinois and Indiana, I entered the environs of Lexington, Kentucky as a decidedly older Huck—tape recorder in hand, notepad at the ready—with the hope of finding new keys to America’s oldest story. With the aide of Andrea James, director of the city’s Julietta Market (more on that wonderful project in a later post), I discovered the Blue Grass region’s Black Hamlets, a collection of 16-plus, small rural communities scattered throughout Lexington’s legendary horse country and beyond. Collectively, these places constitute possibly the largest area of continuously Black-owned land in America, in some cases dating back to the ante-bellum South.

As a so-called Border State during the Civil War, Kentucky had a contingency largely unavailable in the states that would later form the Confederacy. It allowed slaves to earn money and eventually buy their freedom enabling some free Blacks to buy land which would be sub-divided and sold to other Black families, and passed down from generation to generation. Hence, today’s hamlets. In light of the fact that Lexington was also the location of one of the South’s largest slave auctions, the rise and continuous control of Black-owned land was no small feat.

The power of that history is both softened and heightened when I sit down at Leslie and Allen Carter’s breakfast counter. They are a dynamic Black couple (pictured above) who bought and beautifully restored a 19th century house on 20-acres of land that is the historic site of the Silver Springs Distillery. Their lovely property is aptly named Silver Springs Eqwine and Vineyard because it breeds race horses, produces wine, and offers visitors a very classy AirBnB lodging. Allen, a former running back for the renowned University of Kentucky football team, dabbles in bourbon making as well, a fact that becomes more interesting as I learn about the distillery’s history.

Though the site now consists of only ruins and a spring, the original distillery was established in 1869 and was housed within a 12,000 sq. ft. building. Some years later it would produce a brand called Henry Clay Pure Rye Whiskey in honor of Senator (and later Secretary of State) Henry Clay, whose name is inextricably bound up in the Nation’s fraught racial history. In spite of his efforts to limit the spread of slavery (he is known in some history books as the “Great Compromiser”), Clay owned 60 slaves at the time of his death in 1852, all of whose freedom were provided for in his last will and testament.

Leslie, not to be out done by her husband, was a player and coach for the UK women’s basketball team (being from Connecticut, I naturally had to rib her as to why UK could never beat the UConn women). After a stint in a European professional basketball league, her sports career was capped off with an induction into the Kentucky Sports Hall of Fame. She grew up in Lexington’s predominantly Black East End where her grandfather held the position of horse foreman, a prestigious job, but as far as a Black man could go at that time in Kentucky’s equine industry. Leslie’s father learned the art of horsemanship from him, and would go on to care for the famous Derby winner, Sunday Silence as a yearling. It is through that lineage and background that Leslie and Allen breed their own winning race horses today.

The couple’s athleticism is now channeled into their home and the farm’s ever-expanding activities. As I’m gobbling down farm-fresh eggs that Leslie had gathered this morning, drinking coffee that Allen roasts under his own brand, and scoffing down blackberry cornbread that won a recipe contest in Southern Living Magazine, Allen is gifting me a bottle of sparkling wine produced from a vineyard he was leasing at the time (they have a five-acre vineyard on their property that’s still in development). “It was the first wine I made, and I was thrilled when it won the ‘Double-Gold’ award at the state’s Commissioners Cup,” he tells me.

All this history, all this outstanding food and beverage, and all this love for a place are barely 10 minutes from downtown Lexington. But maybe what is most stunning to me is the enthusiasm that two people bring to an enterprise that sturdily reinvents, even leap-frogs at times, old traditions that now bear a new face.

Faith in a Seed

“Shag bark hickory, white yarrow, wild roses, wild grapes, chickweed flowers, blackberries, goldenrod, Granny Smith apples, dandelion, purple deadnettle, elderberries, persimmons, eastern redbud, bee balm, violets….” Like Homer reciting the names of the Greek ships or a devoted birder ticking off his lifetime of sitings, Obiora Embry gives me an oral recitation of the plants within his domain. But unlike the ancients or nature’s dogged cataloguers, Obiora’s list is comprised of undomesticated flora found within the boundaries of Martin Acres, the land he now stewards with his twin-brother, Irucka Ajani; land that was purchased before the Civil War by their great-great-great grandfather, Lourenza Dow Martin, who bought his way out of slavery.

Located in Greenville, Kentucky, almost three hours southwest of Lexington, Martin Acres is the place where Obiora, 42, became a self-taught horticulturist. As Henry Thoreau said of himself and his New England lands in the 1840s, Obiora has also “…been these forty years of learning the language of these fields that I may better express myself.” With the help of a trusty Peterson Field Guide to Edible Wild Plants, his own father, Jim Embry, and a botanist friend of the family, Obiora became a self-taught expert who holds an encyclopedia’s worth of plant knowledge in his head. Like Thoreau, not only can he tell you when a plant typically blooms, but also when they actually bloomed for each of the last five years. “I don’t write anything down; I just observe and recognize patterns in nature,” he tells me. “I also know when plants have been most fruitful. For instance, this has seen a bumper year for blackberries. I just harvested two gallons by hand, and boy, that’s a lot of work!”

But it’s work that is being transformed into an artisanal line of Martin Acres Jams and Jellies which are made in small batches by Obiora and Irucka exclusively from the plants found on their farm. They even make their own pectin from wild apples, and use raw cane sugar (the only “import”). “My mother taught me how to make and process my first jam when I was 16.” As one who has been lucky to sample some of their craft-made products—Goldenrod Jelly, Spring Flower Jelly, Wild Sumac Jelly—I can attest to their deliciousness which is enriched by the story of the place and its people. While their brand isn’t likely to give Smucker’s jellies a run for their money any time soon—JMSmucker is a mega-food corporation with Ohio roots and Kentucky-based operations—Martin Acres offers something a whole lot more soulful. In the meantime, Obiora hopes to produce enough jams and jellies to one day sell at the Julietta Market.

Like Leslie Carter, Obiora also grew up in the East End and experienced the various faces of racism. He tells me how his mother was denied the valedictorian designation because she graduated from a previously all-Black high school that had just integrated with a previously all-white high school that wasn’t about to bestow academic honors on a Black student. He’s also witnessed the decline in the number of Black-owned businesses during the 1980s and 1990s in parts of Lexington which he feels is a result of under investment in local businesses by the City of Lexington and other financing sources. “The economic strategy was too ‘developer-centric.’ The money didn’t go to the people who were already running businesses here,” he tells me echoing criticisms I’ve heard from activists in other small and medium size cities.

With a turn to supporting locally owned businesses—including the increasingly popular idea of locally grown, made, and prepared food—cities are discovering the potential within their own ranks for a form of economic growth that promotes equity, a higher quality of life, and a more authentic (and healthful) identity. In a city formerly known for tobacco and cigarette manufacturing, one particularly twisted form of “equity” was the practice of selling a single cigarette at a time to people who couldn’t otherwise afford a whole pack. Breaking that mold and reinventing itself are big parts of what people like the Embrys and the Carters are doing for the Lexington region.