Faith in a Seed 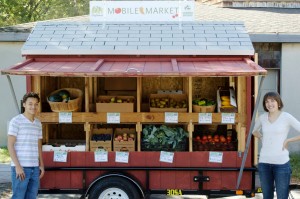 Where and when did the food movement begin? Without consulting the Book of Genesis – and to avoid a protracted debate – let’s just say it wafted in on some twentieth-century breeze making landfall on a relatively undisturbed portion of the American coastline (specifying which one might also start a fight). There, it eventually found fertile ground in the warm heart of a young man disaffected no doubt by his mother’s cooking and a persistent bowel irritation traced back to a steady diet of Twinkies.

Finding a female companion whose soul was filled as much by a desire for joy as by the same simmering rage, the first revolutionary food couple turned their backs on the A&P and roadside diner. Somehow, they managed to stay warm that winter by feeding ripped pages from their mothers’ Good Housekeeping Cookbook into a rusty woodstove. Wide-eyed and innocent, they planned a spring garden, which to them was only a concept they had overheard from their grandmothers.

A Garden of Eden it wouldn’t be, but what did bear fruit that first season was less a story of bounty and nourishment than it was a story of human agency. Together, they had rejected a convention which, at worst, contained a destructive power that was only just becoming known, and at best was so overwhelmingly mediocre that acceptance would consign their spirits to the pale ash-bin of a paltry life.

This is my food movement creation story, and I’m sticking to it. Disgruntlement balanced against hope; failure offset by a fire in the belly and an untiring urge to innovate. The words of Mark Twain always ring true, “All you need is ignorance and confidence: success is sure to follow,” And we need faith in the seed.

That so much of our daily life is informed by a queasy acquiescence to society’s norms was brought home to me in a recent column by Vanessa Friedman, chief fashion critic for the New York Times. Of course, anyone eyeing me wearing one of my two standard outfits – unfashionably shabby and slightly less so – would certainly wonder what I was doing snooping around the style pages. On this particular occasion, however, Ms. Friedman was railing against what she called the “new mediocre,” the ho-hum, nothing-new-here trend in fashion design. But she wasn’t just referring to the uninspired collections from this fall’s designers; she extended her critique to politics, literature, and culture. With the exception of the field of finance, where greed serves as a constant grist for innovation (“Tried that new subordinated debenture hedged against Canadian cod futures yet?”), our world and its expectations have been down-sized, and, according to Ms. Friedman, “individuals tend to play it cautious, opting for incremental change…as opposed to radical change.”

I tend to agree, except in the case of the food movement. We abhor the mediocre, we flock to change like moths to light, and we worship at the altar of innovation. Passing through New Haven, Connecticut, last month, I had a chance to catch up with a young friend by the name of Caitlin Aylward who was managing the City Seed Mobile Farmers’ Market. In what now seems like an age-old battle to get good food to every underserved corner of America, the continuum of innovation has taken us from the development of cooperatives, supermarkets, and farmers’ markets to small-scale, laser-sharp methods of bringing food to the people. In New Haven’s case several lower-income neighborhoods continue to defy efforts to find cost-effective solutions to poor food access.

The mobile farmers’ market is nothing more than single-axle, 12-by-6 foot trailer that supports a perfectly adorable, custom-made farm shed whose side panels open up to a full display of Connecticut-grown produce. The farm stand finds its way to neighborhoods with insufficient density and dollars to support even a conventional farmers’ markets. It gets to these places by way of a dented, donated Honda driven by Caitlin, whose Wesleyan University education did not include even a minor in heavy equipment operation. For 15 weeks in the summer and fall, the farmer’s market makes it rounds to 16 different sites in the city where it takes cash, WIC and Senior Farmers Market Nutrition Program vouchers issued by the State of Connecticut, and EBT/food stamp cards whose value is doubled by foundation funding. The produce is sourced from several area farms including the Common Ground Charter School, which has a one-acre teaching farm, and Hall’s Farm, one of Connecticut’s oldest organic farms.

Having just finished its third season, the mobile farmers’ market sold over $17,000 of produce, 15 percent more than 2013. That represented 13,000 pounds of fruits and vegetables purchased from Connecticut farmers. The program includes cooking demonstrations and other food and health-related enrichment activities. And City Seed is even doing a program evaluation which so far shows that its customers give the farmers’ market a high rating (9.3 out of a possible 10), and that 66 percent of the respondents report eating more fresh, seasonal produce.

I don’t single out the City Seed project because it’s necessarily best in its class – there are hundreds of such ventures operating or springing up across the country – or because it’s the answer to all our access problems. As Caitlin willingly admits, “Yes, it’s a good project, but it’s still only a Band-Aid.” But what the mobile farmers’ market stands for is yet another progression in a long line of innovation, learning from others, and connecting the dots. It brings together knowledge of place and community, smart social enterprise thinking, and an aggressive use of public policy to level the playing field. The policies themselves are a product of a continuous evolution and innovation that began in the 1980s.

Some big projects are the culmination – though I suspect there are never any final culminations – of years of pilots, mistakes, and stumbling forward until some grand vision is realized. Such may be the case with a Louisville, Kentucky, food hub (http://civileats.com/2014/12/03/the-nations-biggest-food-hub-coming-to-louisville-kentucky/) touted as the largest in the nation that will provide a virtual one-stop selling destination for farmers and access point for restaurants, processors, and food banks. At the other end of the size scale is Aly Lewis in Del Ray Beach, Florida, whose up-by-the-boot-straps non-profit is turning surplus beeswax from a local beekeeper into lip balm sold in local drug stores. The profits will be used to start community gardens with SNAP recipients and a nearby food bank. “Let the shapes arise!” as Walt Whitman said.

We’re sometimes so caught up in the moment – jamming that next grant application out the door or dousing a dozen little fires – that we lose the historical connections that keep the food movement in perpetual motion. Consult Michigan State University’s Good Food Timeline found in the report authored by Rich Pirog, et. al. (http://foodsystems.msu.edu/resources/local-food-movement-setting-the-stage) and you’ll be astounded by how far we’ve come: 340 farmers’ markets in the 1970s – over 8,000 today; one food policy council in 1987 – over 200 today; the first pilot farm-to-school project in 1996 – over 38,000 schools involved with farm to school in 2014!

Because the Good Food Timeline wants to tell the whole truth, it also charts the astronomical growth in SNAP enrollment and the abject failure of the minimum wage to stem the growth in poverty or reduce hunger. But even here the food movement strives to keep pace by embracing the cause of low-wage food chain workers and passing innovative legislation such as the Food Insecurity Nutrition Initiative in the recent Farm Bill to provide more incentives to lower income shoppers to buy locally produced food.

The litany of programs and policies is endless, in part due to the openness of innovators and developers to share their wisdom with the next generation of innovators and developers. This diffusion of ideas and energy across a wide landscape has expedited the process of program reproduction without resorting to cookie-cutter approaches. Each person in their own way has assimilated the lessons learned from others and applied them to their own place and circumstances.

Even the Johnny-Come-Lately venture capitalists have climbed on the band wagon trying to cash in on the disaffection that propelled the First Foodie Couple on their journey. I couldn’t help but smirk at a recent New York Times story on Sweetgreen, “a fast-casual salad restaurant…that raised $18.5 million in financing.” Hip, healthy, and local, one of Sweetgreen’s investors, Steve Case (an AOL co-founder), said, “There’s clearly a revolution in food underway.”

Hmmm, where was Mr. Case fifty years ago when the revolution began? Where were the vegetable capitalists when thousands of little start-ups were hawking their lettuce in church parking lots? Oh well, let them make money if they can; maybe they’ll plow their profits back into the real revolutionaries, the next round of eager, bright, idealistic, fair-minded and far-sighted food adventurers. Be assured, the menu is ample, and there’s not a mediocre item on it.