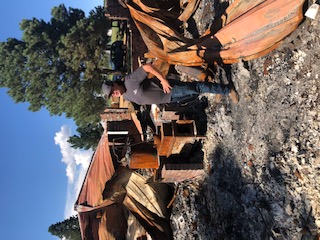 A vulture is circling overhead as I’m staring at the rubble of a house that used to be a home. Randy Cruz, the sad owner of these ruins, is giving me a tour of this ungodly collection of charred debris. “There’s my bed,” he says, pointing to the remnants of a bedspring. “Under that is where I kept my guns, but I can’t find them. They must have melted.” A stack of red, yellow, and orange Fiesta tableware sits where the kitchen used to be, covered in soot but still neatly stacked, the only stroke of color to relieve an otherwise blackened scene of total devastation. Asking him if I could take a photo, Randy poses in front of a small woodstove, one of the few recognizable items amidst the twisted sheet metal and piles of brick. “Sure,” he says chuckling, “Should I start a fire?” Fortunately, three months after one of New Mexico’s worst wildfires in history, his sense of humor is still intact.

I met Randy almost three years ago at the Eldorado Farmers’ Market located just east of Santa Fe. Like other local food enthusiasts, I started buying eggs from him while catching regular doses of his contagious excitement for the hens, ducks, turkeys, and geese he raises at his Sapello, New Mexico farm. It was at the market one day that I overheard a conversation between him and a customer. Apparently, a neighbor’s pack of marauding dogs had tunneled under his fence and wantonly killed over a thousand birds—an event that occurred not once, but twice. Randy was distraught and angry with his neighbor’s carelessness, but the very next day, he placed an order for replacement pullets.

As the dark cloud of the pandemic settled over New Mexico six months later, and Randy’s restaurant and direct sales accounts began to dry up, he wondered how he’d sell the thousands of eggs that his poultry were now producing. It turned out his concerns were premature. Worried about their own food insecurity, individuals were driving 75 miles one way from Santa Fe to buy his eggs, often a case (30 dozen) at a time.

Any reasonable person—even natural risk takers, like farmers—would assume that two catastrophic hits in six months is more than your fair share. But this spring, just two years after the lockdown began, smoke was blowing from the direction of Hermit’s Peak across Randy’s farm. Pretty soon firefighters were everywhere, evacuation orders were issued, and the flames swept through Randy’s farm on their way to consuming 350,000 acres of New Mexico’s forests and grasslands. But just as the final embers of the house he shared with his husband Dan had died out, the angry gods of the Pecos Wilderness whipped up a gully-womper of a monsoon deluge that drowned pastures, moved fences into the next county, and turned roads into canals only fit for amphibious vehicles. Every farmer knows that shit happens, but these events were beyond excremental.

If there was any justice left in the universe, Randy was certainly due some. Though the wildfire took out his home, it spared the chicken coops (900 baby chickens were lost to the April cold because power was lost for weeks and his heaters couldn’t operate), two other houses on his property, and most of his farm equipment. The mercurial behavior of the fire was apparent everywhere. A bone-jarring ride in Randy’s ATV throughout the Manuelitas Creek area and along county road A4A revealed house after house burned to the ground interspersed with a house that was untouched. Hillsides and ridgelines were nothing but blackened pegs of needleless ponderosas that would alternate with pastures later made verdant by the floods.

If there was an upside to the New Mexico spring and summer from hell, it was that the valleys and pastures had turned so impossibly lush that you were tempted to ignore the combined destruction wrought by fire and flood. On an 80-degree, cloudless August day in the Pecos foothills, Paradise had supplanted the Inferno that had brought a billion dollars or more of wreckage and ruin to people’s lives. But blue skies and green grass are not salves for hearts broken by extreme assaults of man and nature; warm temperatures and a new FEMA trailer don’t heal the trauma of dislocation and barely escaping with your life. “As I was driving away from my house, I could see it going up in flames in my rear-view mirror,” Randy told me. “I thought our car was going to blow up because hot cinders were raining down on us.”

A bumpy ride down washed-out A4A may not be the best place to administer trauma therapy, but I asked Randy how he feels about all this, and if he ever thinks about giving up farming. “All I know is that I got a business to run,” he replies. “I don’t think about giving up; I just keep going.” One can argue about forms of denial and stages of grief, but you can’t help but wonder about farmers who are unable to take time to heal because they have a hundred chores to do. Maybe community support helps, which came from Randy’s many neighbors who volunteered to collect eggs because his workers were forced to leave. And maybe some fleeting moments of care come from the loyal farmers’ market customers who lined up at Randy’s stall on May 20th to welcome him back with hugs and kind words. One might hope, however, that there was more than good wishes and FEMA bucks to shore up our farmers’ resilience. Sometimes mending souls is just as important as mending fences.

Some farmers cope with calamities by redoubling their financial and time investments. Perhaps to insulate his farm against the vagaries of Mother Nature as much as to diversify his product line, Randy purchased a containerized, controlled-atmosphere plant production system manufactured by Freight Farm. The container, which he plans to have operational this fall, will hold the equivalent of two-acres worth of lettuce—seed to harvest in 60 days for each head. “Cid’s [a Taos supermarket] told me they’d buy $100,000 of produce from me a year,” Randy said.

Not to be content with his current egg production status quo, Randy also bought a $75,000 egg washing and sorting machine that processes 9,000 eggs per hour. This lovely little contraption takes eggs along a conveyor belt into a small channel lined with swirling brushes which remove any dirt and fecal matter. Each egg is electronically weighed and sent into the appropriate chute for packaging. More poultry, eggs, sales, and workers will ensue.

Persistence, capital, faith, and deep wells of human energy may buffer farming’s fraught enterprise. No matter how favorably the gods look down upon you from season to season, or how many resources you have to deflect the slings and arrows, it’s always three steps forward, two steps back, one year, two steps forward and three steps back the next. If over a lifetime you come out a little bit ahead, then you’ve done well. In the meantime, tending to the well-being of those who voluntarily choose that struggle—to feed us, among other reasons—is a community job. To simply praise farmers for their endurance and tenacity in the face of so much hardship is not enough. We better be there—emotionally as well as financially—when they need help, even when they don’t ask for it.