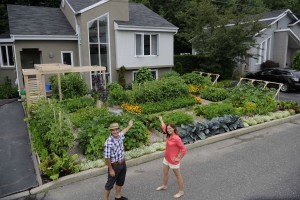 “I am quite sure that people only have the kind of government that their bellies crave.” From Paterson by William Carlos Williams

“Florida Lawns Are Being Transformed into Edible Farms,” gushed the Huffington Post (June 1, 2016) story about how a dozen Orlando, Florida homes had converted their manicured yards into tidy vegetable patches. Highlighted by sharp photos of well-tended rows of greens, the story explained how suburban sod had given way to salads planted and tended by a project called Fleet Farming. Homeowners mothballed their lawnmowers while getting a cut of the greens from their yards; earnest gardener volunteers had an outlet for their horticultural energy; and Fleet sold most of the food at farmers’ markets returning the proceeds to their coffers to finance future gardens.

Great idea, I thought, but why did it sound so familiar? Then I remembered a story I had read about a homeowner in Orlando who had been fined by the city for degrading that most sacred of American institutions, the front yard, by ripping out his grass and planting a 25-by-25-foot vegetable garden. As reported in the New York Times (“The Battlefront in the Front Yard,” 9/12), one Mr. Jason Helvenston was apparently in violation of section 60.207 of Orlando’s Land Development Code (not maintaining proper ground cover). He had gotten away with this vile deed for several months, presumably tending his tomatoes under cover of darkness to avoid capture, when a neighbor decided to bust him for his guerrilla gardening practices. Since the Huffington Post had made no reference to Mr. Helvenston’s dastardly deed or any history prior to Fleet Farming, I wondered what had transpired over three-and-a-half years to transform Orlando from a veritable Sodom and Gomorrah of home landscaping into a Garden of Eden?

Mary-Stewart Droege is a planner for the City of Orlando. Over the past few years I’ve had the occasional opportunity to work with her and some members of an area food coalition. I asked her why an activity that was previously illegal had found expression as a full-fledged and legally “out there” program? “The [City of Orlando] updated Landscape Code ordinance that addressed front yard garden came out of this [Helvenston] episode,” she told me. It’s this ordinance which explicitly allows home food production and cleared the way for the exciting venture that is now Fleet Farming. Mary-Stewart went on to say that, “We just submitted a USDA Farmers Market Promotion Program grant application to expand Fleet Farming into a low-moderate [income] community as part of a CSA model and to add more farmers’ markets.”

Orlando, like other cities, didn’t stop with efforts to revise outdated ordinances that had placed turf before turnips. Mary-Stewart said a chicken ordinance is poised to pass, fashioned after similar regulations that now treat microbreweries and small-scale food processing as home occupations. She said that newer policies are expected to come out of an Orange County Florida food assessment that will address food production, processing and distribution.

If you haven’t figured it out yet, the point of this little Orlando food history is to reassert the primacy of public policy in allowing good and creative food projects to take wing. Either the Huffington Post ran out of room or they simply didn’t get it. Cool stuff like Fleet Farming doesn’t just spring forth fully formed without a considerable amount of skid-greasing from city hall, usually aided and abetted by savvy food advocates and planners, and sometimes food revolutionaries like Jason Helvenston. Human memories are short and fragile things known to evaporate entirely when struck by the hot spotlight of a new food venture. But behind most small steps for food system progress lurks the shadow of public policy.

One would never know how important policy was strolling through the Santa Fe Farmers Market on a clear, sweet Saturday morning. But the fact is that the health, vigor, and happiness so abundantly on display, including the one hundred or so small farmers selling their goods, were purchased with the blood of a thousand policy skirmishes. Most of them were small and never saw the light of day. They were paper cuts that came in the form of a steady stream of city and state inspectors and bureaucrats hell-bent on shutting the market down with petty interpretations of regulations. Like the early Christians, farmers’ market organizers were chased annually by jack-booted private developers and public authorities from one garbage-strewn dirt lot to the next. When the City of Santa Fe and private foundations finally realized that the farmers’ market could be as big a tourist attraction as Georgia O’Keefe’s erotic flowers, it only took them ten years to raise the money to build what finally became a gorgeous market shed at the Old Railyard. Socially minded private entrepreneurship watered by good public policy leads to prosperity for all.

As thousands of food projects across the country began to soar, public policy actors who had once been foes were reborn as friends. A 2013 Michigan State University survey of how local government supports food system activities revealed that, from the 2,000 individual city and county respondents, there were an average of three food policies per respondent that supported such initiatives as better food access, community gardens, and farmers’ markets. In New Mexico’s case, once public policy officials recognized that farmers’ markets provide multiple benefits, funding by the New Mexico Legislature supported a robust Double Up Food Bucks program for the state’s farmers’ markets. And continuing the policy progression from local to state to federal, the New Mexico Association of Farmers’ Markets further enhanced the experience with a multi-year, multi-million dollar federal Food Insecurity Nutrition Initiative (FINI) grant.

Indeed, finding food policy synergy between all levels of government leverages more funding, more food projects, and more people served. In May of this year, the Los Angeles City Council agreed to prepare a local ordinance that will require all 57 farmers’ markets operating within the city limits to accept California’s Electronic Benefit Transfer card. This measure was vigorously supported by the LA Food Policy Council and local anti-hunger advocates. According to Jackie Rivera-Krouse with the Sustainable Economic Enterprises of Los Angeles , increased EBT access benefits both customers and farmers. “The farmers love it. It’s money at the end of the day,” she said.

Just to be clear, a federal program, often administered by a state agency, can benefit more people with healthier food and provide additional farm income when city food policy kicks in. Yes, making these connections, doing the research, and advocating for changes can be difficult and complex work – “transparency” and “government” are not necessarily kissing cousins. So when local food coalitions and councils tell me they don’t want to do food policy work – they don’t trust government, government bureaucracies are opaque, they prefer to do just projects – I can understand their frustration. That is when I urge them to not forget the food movement’s history nor dismiss the critical role that public policy plays, particularly at the local and state levels. “Those who don’t know history are doomed to repeat it,” is the quote famously ascribed to Edmund Burke. I would add that those who don’t even know that history exists are doomed to ride stationary bicycles going nowhere.