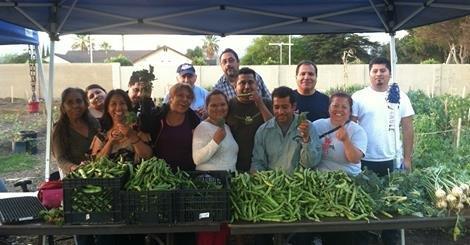 What is the sound of a woman’s hands slapping a corn tortilla into shape? Is it water falling over a rocky stream bed? Or a series of slaps across your face? No, my friends, I think it’s a doctor’s slap across a baby’s bum to remind it that life has begun. Yes, I think that’s it – a call to action, a signal that the simple perfection of your mother’s breast awaits.

The nurturing sound of human hands on food, and the arousing scent of sizzling, herbed-up fresh vegetables fill the pop-up shade canopies under which we sit. The summer sun is sinking just behind the compost pile massed at the western edge of Huerta del Valle, a community garden located in the flight path of the Ontario, California, airport. It is three-and-a-half acres packed with lush green plants and rainbow shades of produce, and it’s a place that ripples with a near-divine sense of community where the Spanish chatter of women is so sweet, so richly woven into the air around us, that it muffles the scream of landing jet planes.

Maria Alonso presides over Huerta del Valle with the countenance of a gentle priest – available, affable, affectionate; never insistent nor hovering. Though the daughter of a Mexican farming family, she always managed to find a hiding place whenever her father summoned her to the field. But like millions of parents of the past decades, it took a child with a health condition that might be remedied through diet to bring her enthusiastically back to the soil. In Maria’s case it was her ADHD son, and a doctor with the imagination to “prescribe” unprocessed, chemical-free food that changed Maria’s life. Lacking land and the means to buy retail organic food, she set about the task of organizing a community garden so she could “grow her own” and help others do the same.

The first site was on a piece of Ontario public school land that could only accommodate 15 gardeners. But Maria’s community of healthy food eaters was growing rapidly and needed something larger. Working with a very cooperative city planning department and the Healthy Ontario Collaborative, not only did Huerta find their current site, they found funding support from Kaiser Permanente and institutional support from nearby Pitzer College which, coincidentally, was also offering their students food justice courses.

The Pitzer connection would eventually bring money, produce sales, and eager volunteers to the bourgeoning Huerta project, but most importantly it brought a recent graduate, Arthur Levine. Arthur is Maria’s sidekick, confidant, and, as a fluent Spanish-speaker, sometimes translator. Brooklyn-born and bred, Arthur doesn’t have an agrarian background, but tells me, “My mother is a chef and a stay-at-home mom who taught me to love and value those who work in food, grow the food, cook the food and provide for the most necessary needs of life.” You could say this love found further expression in his growing passion for social and economic justice which “are amazing and worth fighting for,” not by smashing Wal-Mart, he assures me, but by “building the world we want to see, and that really works for everyone.” One might reasonably conclude that Arthur’s path to Huerta was pre-ordained.

Nestled into a densely packed, mostly Latino neighborhood of small, tidy homes, Huerta del Valle shares a border with a pleasant town park which is also home to a vibrant community center. However, I’m forced to lean closer to Maria so I can hear her over the roar of a descending Southwest 737. Giant commercial warehouses and the airport’s service industries dominate the neighborhood’s fringe. These structures are fed and disgorged by a constant convoy of trucks spewing diesel fumes on their way to and from nearby I-10. When the wind blows just right, petro-chemical odors from two plastic molding factories overwhelm the scent of the garden’s cilantro. Warehouse jobs – a source of many occupational injuries – and the construction industry’s ruthless quest to conquer California’s landscape with McMansions are the community’s primary employers. I guess this is what passes for affordable housing policy in America – we keep housing prices low with the help of environmental injustice.

It’s no surprise then that Maria’s community of friends, family, and neighborhood residents seek refuge at Huerta del Valle. They are not refugees fleeing an imminent threat so much as pilgrims seeking the joy of each other’s company and the earthly delights of a beautiful place. At present, 62 families tend garden plots (there are 15 families on a waiting list; it’s estimated that each family plot generates $15 a week in food savings). Two, half-acre plots are managed independently by three urban farmers – Andres, Eugenio, and Gonzalo – as part of Huerta’s effort to explore the commercial potential of urban farming. These small farming businesses are assisted by garden staff who market their harvest at three community farmers’ markets, one CSA, seven area restaurants and the Pitzer dining hall. That, plus several hundred volunteers, dozens of school groups, and assorted WWOOFers from as far away as China, Colombia, Austria, Germany, and Sweden make up what is a robust and multi-functional use of this peri-urban land.

Huerta’s numbers are as impressive as the bounty of its plots. Having seen more than my fair share of community gardening enterprises I would have to place this one at the very top of my qualitative and aesthetic ranking. But as I’ve said before, the most important word in community gardening is not gardening. And it is in the world of community building where Huerta definitely excels.

“This is my community,” Maria says to me in a loving, non-possessive way. “I hear from the gardeners all the time how the ‘garden makes us feel better,’ and that ‘I don’t feel depressed in the garden,’ and that ‘the garden is my family and my therapy.’” She goes on to relate one heart-wrenching tale of a woman who was leaving her abusive and heavy-drinking husband after 23 years, and who told her, “’I need change in my life, Maria. You can give me the power to change.’” Community organizer, gardening coach, and Mother Confessor are the skills Maria employs that nourish the garden far better than any fertilizer could.

As Huerta’s principal salesman, Arthur describes for me their unconventional marketing strategy, which consists of one part community engagement and what economists might loosely call the Robin Hood wealth redistribution model. “On Saturday morning the surrounding community can buy produce at the garden itself for $1 per pound; Pitzer College might buy the same produce at $2.50 per pound; and high-end restaurants may buy it for $4 per pound. I understood as well that there were one or two ‘elite buyers’ who were permitted to pay $8 per pound.

While this “pricing policy” might not fit the ideal of market-place transparency, everyone participating in this Ontario-based value chain seems happy with its values. From the family gardeners who donate their surplus to the “common marketing pool” to those at the top of the region’s food chain – including some very talented and progressive chefs – Huerta is creatively and collectively starting to generate a modest revenue stream.

But just because Maria and Arthur have strong community building and entrepreneurial instincts doesn’t mean they don’t also have to hunt for grant funding. The project’s start-up funds are diminishing, which have reduced Maria’s monthly stipend to only $1,100 for what amounts to a full-time job. Though the City of Ontario and Pitzer have been generous contributors – both in-kind and cash – Huerta del Valle recently submitted a grant application to USDA’s Community Food Projects grant program, which, if successful, would allow Huerta to fully set its sails. This might enable Maria to begin work on her vision of a “community garden every mile,” a beguiling concept that sites community gardens at one-mile intervals in a hub and spoke pattern radiating out from Huerta del Valle.

Feeling a bit over-fed by the loving attention of women who thought I wasn’t eating enough, I accept Arthur’s invitation of a guided garden tour. I’m escorted along 100 feet rows of purple basil and habaneros; kale whose productive life has extended across a southern California growing season from October of 2014 through this July; and long borders of stone-fruit trees, sunflowers, and melons. Competing herbal scents are everywhere; my eyes lavish attention on the ascending rows of horticultural perfection and the subtle shifting of green hues. But suddenly my Anglo ears are assaulted by a powerful blast of pulsating Latin music. Noting my startled look, Arthur assures me that everything is all right: “It’s six o’clock. That’s when Huerta’s Zumba class begins.”

Somewhere near the tomatoes, on an improvised workout platform of assembled wooden pallets, the hips, arms, and shoulders of a dozen women of all shapes and sizes are gyrating to an insistent, sensual beat. They are trying, with varying degrees of success, to follow the lead of their instructor, who’s urging her pupils on to ever greater exertions. I’m mesmerized by the motion and music, tempted to join in but ultimately restrained by a WASPish self-consciousness. Yet I’m suspended in the moment of what, by all accounts, is the essence of community, a place where love, health, physical activity, and an aching need to connect find union. Wouldn’t one of these every mile be the answer to most of life’s complications? While I contemplate an answer, I feel my hips start to sway; my taste buds relive the delights of a home-made, home-grown meal, and the California twilight fades to night.