In Search of the Just Chicken 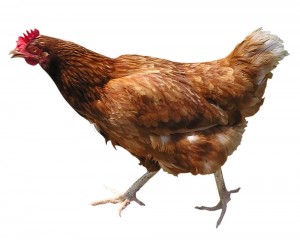 Once again I stand in awe of the challenges and opportunities presented by our complex food system. The hard work of bringing healthy, affordable food to everyone while adequately protecting everything and everybody along the food chain is not for sissies. We may make progress on one front just as new fronts open up all around us. And we may try to gather up all of the food system’s cats into our big, hairy arms only to watch them struggle free in petulant defiance.

The ongoing urge to milk every ounce of goodness out of our food system while eliminating the bad reminds me of something F. Scott Fitzgerald once said, “The test of a first-rate intelligence is the ability to hold two opposed ideas in the mind at the same time, and still retain the ability to function.” In Los Angeles, good food advocates are aspiring to this higher level of intelligence as they try to implement the nation’s most comprehensive good-food procurement strategy.

Called the Good Food Purchasing Program (GFPP), the Los Angeles Food Policy Council and the Food Chain Workers Alliance want to go beyond the buy-local trend forged by the farm to school movement. According to the National Farm to School Network, over 40,000 schools nationwide are operating some form of farm to school program. But the City of Los Angeles and the L.A. Unified School District, which together serve over 750,000 meals a day, have set the bar several notches higher. They have embraced a procurement standard that includes local food sourcing, nutrition, animal welfare, economic development, environmental sustainability, and here’s the kicker, labor issues.

Over lunch on a balmy January day in L.A., Clare Fox, the FPC’s executive director told me, “The GFPP is the best of what food policy councils can do.” She stressed that “public procurement is a real food systems issue” because it directly addresses most of the key values that are increasingly driving food consumer choice. Fox and her colleagues shepherded the procurement plan through the large and organizationally complex food policy council, which literally engages hundreds of people and groups. Such a thorough vetting process ensured that these ambitious standards had widespread support.

Listening to Fox talk about the power of public procurement made me imagine a stroll down a grocery store aisle where I casually strike up a conversation with a red pepper. “Are you as nutritious and healthy as you look?” I ask him (“he” looked male to me). He proceeds to give me an impressive list of his nutrient content, their health benefits, and the agro-chemicals (or organic materials) used to grow him, including the ones that may have leached into waterways or harmed wildlife. To the annoyance of the neighboring avocadoes he continues in a rather animated fashion to tell me stories about where he’s from and how far he’s traveled to reach this store. His tale ends with the relationship he had with his harvester, who explained how much he was paid and the working conditions he labored under. Now try having the same conversation with the thousands of food items that an institution like the LAUSD must buy. If you’re successful and can then make informed purchasing decisions, you may very well have the whole wild food system by the tail!

Joann Lo, the Food Chain Worker Alliance’s executive director, is a woman with an intuitive grasp of the food system web. She joined the environmental club in high school, converted to veganism while attending Yale University, and became a supporter of both organic food and Yale’s worker unions. At that time, almost 20 years ago, the workers were fighting for better wages from one of the world’s most powerful institutions. So like a hybridized seed that found its way to a very fertile growing medium, she landed in L.A. with the FCWA, a powerful force for fundamental food system change. And just as fortunately, that soil was tended by its chief gardener, then-Mayor Antonio Villaraigosa, himself a former labor organizer who appointed Paula Daniels, then a local Public Works Commissioner, to organize the LFPC. From that point on it’s been very collaborative effort involving thousands of people.

As one of many food chain worker representatives on the LA FPC, Lo played a catalytic role in bringing the interests of food and farm workers to the table. When public procurement boiled to the top of the FPC’s early agenda, the “Build a Market for Good Food Working Group” took on the task of drafting what would become the “Good Food Purchasing Plan.” The plan’s power is in the way it balances a web of food system issues against one another through an intricately designed 5-star rating system.

But what is GFPP’s strength may also be its weakness. In a Progressive Planning article (No. 147/Fall 2013) co-authored by Lo and Alexa Delwiche, LA FPC’s first coordinator and now the director of the newly formed Center for Good Food Purchasing, the history and sometimes contentious development of the GFPP is recounted. Do we buy our food from unionized farms that are usually industrial-scale operations that also pollute? Or do we buy our food from smaller, sustainably farmed operations with lower, non-union wages? Working this stuff out, even in the mellow air of progressive L.A., produces sparks that can badly singe the negotiators. But work it out they did, and the early evidence suggests that the GFPP may be strong enough to survive the tests that lay ahead.

But maybe not. One of those tests recently arrived on the doorstep of the LAUSD in the form of a 5-year chicken contract renewal worth an estimated $30 million. Chicken is the single largest protein item that public schools purchase, and in the case of LAUSD, that contract is currently held by Tyson Foods.

“Eleven workers have died at Tyson facilities in the last eight years,” Lo told me, “and the company has been hit with over $200 million dollars in fines for workplace and environment violations.” An online review of articles about Tyson’s history of violations tended to confirm Lo’s assertions (reading the horrific story of one chicken plant worker who lost his hand in a cutting machine due to Tyson’s failure to properly maintain safety equipment was particularly distressing). According to a just-released report by Environment America, Tyson and its subsidiaries have released 104 million pounds of pollutants into U.S. surface water between 2010 and 2014, more than seven times the amount that ExxonMobil has during the same period.

Denying Tyson the contract has passed one hurdle, but the question remains as to where the school district will find a chicken provider with enough volume at a price point that public schools – not Whole Foods or Dean and DeLuca – can accept. Are there large producers out there whose occupational safety and environmental pollution records are substantially better than Tyson’s? As currently constituted, the industrial food system is like war: No matter how well you do it, serious harm and collateral damage occur. The assumption at this point is that L.A. will cobble something together from other suppliers who can at least meet some of the GFPP standards.

But there is another chicken battle raging, and while its spoils don’t rival those sought by L.A., it is already virtually won. Thanks to the hard work of School Food Focus, based in New York, in partnership with the Pew Charitable Trust Campaign on Human Health and Industrial Farming, Tyson and Perdue are eliminating the non-therapeutic use of antibiotics in their chicken production. According to Kathy Lawrence, the lead negotiator for School Food Focus, they targeted chicken at the behest of public school food service directors who identified it as their most important product. They recognized that getting antibiotics out of chicken could have enormous health benefits for their children. Tyson agreed, and along with Perdue, was designated by School Food Focus for its “certified responsible antibiotic use” standard. The first on-site, three-day inspection to verify this designation was conducted in April, 2015 by USDA and representatives from School Food Focus.

Tyson’s antibiotic certification is not likely to sway the LA FPC or the FCWA. With $150 million a year in food contracts on the table (and with most contracts going for five years), L.A. believes it has the leverage to play for higher stakes. Perhaps over time, its tough standards will modify the more unsavory behaviors of companies like Tyson who may want to bid on future L.A. contracts. And as the good food procurement movement spreads (similar plans are on the table in places like Chicago, Oakland, and Austin), other big food outfits will have to respond to more “good food” bids worth billions in public dollars.

Though I never really cared for the guy, Frank Perdue’s famous line that it takes a tough man to make a tender chicken still resonates with me. As we advance into the era of values-based eating, which will drag producers with it clucking and screaming, the work of making a “just chicken” will take a lot of toughness.

One group may work hard on a single facet of food production, playing pragmatically but firmly in order to win. Another group may work just as hard in an honest quest to win the whole shooting match knowing full well they must climb a steeper slope. At times it feels like a Sanders/Clinton debate where you know they both want the same thing, but employ different methods of getting there. Let’s just hope that we’re all intelligent enough to hold these demanding and sometimes opposing notions in our heads at the same time without going crazy.