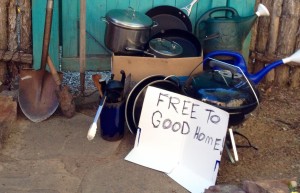 At some point in 2014 a momentous food event occurred. Unheralded by clanging church bells, it nevertheless signaled a pronounced shift in our eating behavior and a realignment of our culture’s tectonic plates. Precisely when and where no one knows for sure, but Americans started spending more of their total annual food dollars away from home than on food prepared at home. According to the USDA, American consumers paid 50.1 percent of their annual $1.458 trillion in food expenditures to others to do part or all of their food preparation for them.

Crossing that 50 percent threshold was inevitable. Since 1929 when we devoted 17 percent of our food dollars to “away food,” there has been a steady increase only slightly interrupted by economic downturns like the Great Recession. National economic prosperity can take credit for some of this decades-long growth, as well as the fact that Americans spend less as a percentage of their total income on food than any other nation. But there is something more afoot than our financial capacity to enjoy meals out, or increasingly, have them made, whole or in part, to be eaten in.

The time constraints imposed on us by our lifestyles and work drive us headlong into the welcoming arms of convenience eating. These are the conclusions that Karen Hamrick, Abigail Okrent, and Aylin Kumcu* came to in their research on household eating patterns. Yes, food costs dictate many of our food choices, but that effect is more on whether we eat at a low-priced fast-food eatery or high-end restaurant or a prepared, ready-to-eat-at-home meal or a meal-kit delivery service like Blue Apron. The more we work (and I would add, the more we work out) the less likely we are to use fresh and/or minimally processed food ingredients to make our own meals. Compressed timeframes impose stress, whether for the lower income mother trying to feed her children in between the two jobs she must work, or the yoga mom rushing to feed her children while still making her next session. Giving in to food out is how we increasingly choose to minimize stress that is sometimes externally imposed and other times self-imposed. Okrent’s surveys even found large percentages of people who actually claim they don’t eat meals as such because they snack all the time, mostly in their cars.

I get stress. As a newly divorced father in the early 1990s who had done pitifully little in the kitchen to contribute to my family’s daily meals, I was suddenly responsible for feeding two young children three days a week. As a man who could barely grill a burger, and as a food activist who touted healthy eating, I was clearly caught between a rock and a cast iron skillet. 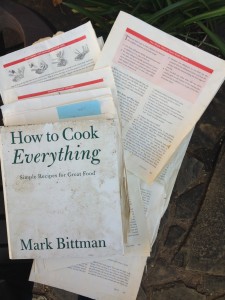 My well used copy of “How to Cook Everything”.

After several failed dinner experiments that left my children ready to sue for an annulment to our joint custody agreement, I eventually found my way to Mark Bittman’s cookbook “How to Cook Everything.” With the aid of a future mate, I became a disciple of the minimalist doctrine of cooking that allowed me to prepare good-tasting meals with whole foods within 30 to 60 minutes. Salvation was at hand; a thousand more or less stress-free meals followed, and my children forgave me for being, in their words, “the only parent who never took us to a fast food restaurant.”

Okrent’s research also underscores the impact that advertising has on convenience eating, especially with fast food. A one percent increase in advertising drives up demand by 0.25 percent, which provides additional justification to limit advertising of unhealthy food as an obesity prevention strategy. But we’re not just talking about how many times a child is exposed to McDonald’s golden arches or the happiness awaiting them in a can of Coke.

Social media, while not explicitly a tool of the food industry, communicates through Millennials and other generations with a ferocious power and speed. When informed that the Korean taco truck will be at Hollywood and Vine at seven o’clock, you can be assured that the eager-to-connect under-forties will flock en masse. As yours truly pens this piece, Home Chef, Hello Fresh, and Blue Apron meal services are running sequential, competing ads on my Internet home page as every one of my keystrokes keeps their algorithms churning. And much to my dismay, I discovered that Amazon is using their/my Closing the Food Gap book page to advertise eMeals@Amazon (does that mean I get a cut of their revenues?).

Though the food industry has not necessarily written off Boomers, whose future food preferences will have more to do with what they can chew, Millennials are that next great mother lode that food entrepreneurs are salivating to mine. To that end, market researchers are slicing and dicing that generation’s every thought, action, and eating behavior. I learned from a number of articles and market surveys that Millennials (75 million strong) eat out more often than Gen X or Baby Boomers, want their food fresher, less processed, more organic, and chock full of ethics. They are very health conscious but straddling the fence when it comes to meat – some eating more, but more eating less – and when they do buy meat, they are more likely to buy it already prepared. And they are very busy.

I conducted my own “field research” by checking in with my favorite Millennial, Peter, my son. As a survey of one, he is a “convenience sample” that is presumably not biased by the approximately $100,000 of food I’ve purchased for him over the course of his 31-year life-span. Now that he’s a graduate student, he qualifies all of his comments with respect to the “empirical data,” but he offered the following qualitative statement: “With the foodie movement, people’s standards have gone up. [Millennials] are no longer OK…with spaghetti and a simple sauce. Since preparing a high-quality meal requires more time and skill…they are more likely to turn to the professional, e.g., food trucks and restaurants, to sate their higher tastes.” Interestingly, he also cited what he called the “Uber-ization of the marketplace” which he feels has reduced entry-barriers for numerous little food businesses, a trend he considers more democratic. He signed off the interview by telling me he had to hurry so he could buy the $11 “farm-to-table” salad before the food truck left.

Peter’s “Uber-ization of the marketplace” comment made me wonder about the proliferation of the home-delivered food industry (now worth $10 billion), which is bifurcated by the very large, decidedly non-democratic services, and the more populist “mom and pop” operations springing up everywhere. Two things disturb me. The first is that the “scaling to bigness” is starting to look like another manifestation of the “Wal-Mart-ization” of the home delivery industry – competition and capital leading to market dominance. The second is the “stressful lifestyle” message that all these businesses – big and small – are baiting their customers with.

In a promotional piece thinly disguised as an independent blog post for the meal-kit assembly giant Blue Apron (valued now at about $1 billion), someone called “Popdust” chortles on about how she/he was “stuck in a boring-dinner-rut,” and was always facing the “what should we have for dinner” question. The writer says, “I’m a foodie at heart, but I’m lost in the kitchen,” which doesn’t exactly fit my definition of a “foodie,” but whatever. Apparently, Blue Apron saved the writer – who admitted that “I work all the time” – because their recipes “never stressed me out.”

Blue Apron’s ability to settle our culinary angst may be purchased in the same way that similar warehouse operations often keep costs low: dangerous working conditions and low-paid workers. BuzzFeed News reports that workers at Blue Apron’s Bay-Area fulfillment center spoke of “low-paid workdays in a warehouse kept at below 40 degrees where fights routinely break out among co-workers…. Employees describe their hectic work as being ‘worse than an entire Black Friday at Best Buy.’” Local police have received “a dozen calls in the last five months that include everything from car theft to weapons threats.” And you thought your life was stressful!

Stress is the taut string that meal services love to pluck. Like the scab over our inadequacies, they pick at it, exposing a wound that only they can heal. Their advertising copy asks if “you dream of a personal chef cooking you (sic) healthy meals so you don’t have to,” and if you are “tired of wasting time at the grocery store.” They reinforce what they think you should aspire to: “a rewarding and busy day at work,” and pour salt into the wound by reminding you that you only have two hours after work to “pick up your daughter at ballet practice, get both kids showered, homework done, and dinner on the table.” And finally, they exploit fault lines in your marital relationship by asking if you expect your husband to cook. “Most likely not,” they respond, “He never really learned how and you don’t have time to teach him.”

I found some hope in the “mom and pop” enterprises sprouting across the landscape. Like farmers’ markets that gave us that home-grown, local alternative to the faceless chain supermarkets, some of these “democratized” and “Uber-fied” enterprises may be guided by less disempowering motives. I stumbled across one promising candidate in Columbia, South Carolina, where University of South Carolina nutritionist Trisha Mandes and her chef husband Eric Hoffman are in the final throes of opening Trisha’s Healthy Table, a vegan prepared-meal joint that will sell you healthy, take-out meals at a reasonable price. Plant-based, local food focused, and lovingly created by two loving Millennials, Trisha and Eric raised 20 grand on Kickstarter and are now going hell for kale to make their dream come true.

Trisha tells me that, “I don’t like the trend of people not cooking. I know female nutrition professors who don’t want to cook some nights, and their husbands don’t know how to cook. I hope that we can help people feel more confident about preparing healthy meals at home.” She notes that her market research included surveys that found individual and household stress as their biggest market driver. That is part of the reason she hopes to empower her customers with on-site cooking classes so that they, too, can learn to prepare tasty, vegan meals for their families. When I asked her if she was worried that cooking classes might undercut demand for her meals (priced at $11.99 each, you pick up at their site, and no tips), she replied, “Nope!”

I suspect that slouching somewhere in the data piles about where and what we eat lurks a deeper socio-economic malaise. For some, work is what keeps us alive even as it threatens to drown us. For those, the late night glare of the McDonald’s drive-thru is a beacon of hope in a very rough sea. For others, whose lives are defined by the pursuit of the perfect career, perfect children, and perfect self, food is a means to pleasure and health, but undervalued in comparison to an ever-ascending hierarchy of needs.

What I sense being lost in our respective personal and class struggles are the old kitchen and garden arts whose practice gives us the whiff of garlic minced on the cutting board, golden carrots grubbed from a small patch of earth, and a rambling chat with a farmer that goes on perhaps a little too long. Time has become our greatest oppressor. If we let it, the clock and our over-crowded field of wants and needs will suck the fluid from our souls leaving us like dried dates on a parched beach. It might be time to reassess what matters, and in the course of doing so, discover that time in the kitchen may be the best part of the day.

* As of this publication the USDA link to “US Households’ Demand for Convenience Foods” by Okrent and Kumcu is broken.