Ramen U: Is This the New Meal Plan?

My father was a business man and plastics engineer – World War II veteran, Eisenhower lover, and Fortune 500 executive. Over his morning cup of instant Nescafe and the New York Times, he’d growl at the newsprint that was inked only twenty miles east in mid-town Manhattan. 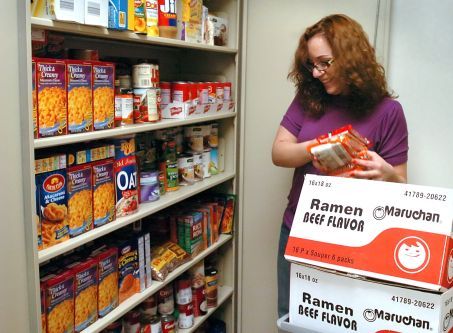 “Who’s job is this?” he’d ask, shaking his head at the latest domestic or international transgression to seize the headlines. “Certainly someone can fix this,” assuming that job descriptions existed for senior managers who could forge world peace, ensure victory on the battlefield, and redress the wrongs of the aggrieved. Even on his death bed, after the caring doctor told him he was dying, my father insisted through his medicated haze on seeing the person who could “fix this problem.” His insistence that a management solution existed for all of life’s events did not allow him to go gentle into that good night.

As I ponder the headlines on collegiate food insecurity and its attendant growth in campus food banks, I can’t help but feel like a chip off the old block. When I see that a survey of students in the California State University system  found that 10 percent experience homelessness and another 23 percent “worry about hunger,” I ask whose job is it to fix this. When I read a piece  by Clare Cady in The Chronicle of Higher Education (Feb. 28, 2016) that cited several campus food insecurity studies – a 2015 survey that found 20 percent of community-college students nationwide were experiencing hunger, that 59 percent of students at one midsize rural Oregon university were “at risk of going hungry,” and that 39 percent of City University of New York students were “similarly at risk” – I find myself screaming at an amorphous universe of technocrats who must be able to end this obscenity.

As long as I’ve been in the community food world, I must admit that I was shocked to discover college and university food banks. My first encounter came in 2012 at the University of Mississippi (“Ole Miss”). The professor who invited me to speak there was teaching a food course that required his students to undertake a joint project. Apparently in response to what they felt was a need for an on-campus emergency food program, the students chose to establish “The Ole Miss Food Bank”which opened its doors in November 2012. It’s website states that it is “a student and faculty led effort to alleviate hunger among students in the Ole Miss community. The mission of the Ole Miss Food Bank is to foster a healthy college community by providing nourishing food to students in need…The Ole Miss Food Bank will rely on the support of volunteers as well as donations.”

In an accompanying video, the University’s interim chancellor, Morris Stocks, says that it’s an “unfortunate reality that members of our Ole Miss community are food insecure.” Channeling my father’s rage, I say, “’Unfortunate reality,’ buddy? You’re the damn chancellor, why don’t you fix it?” Instead of offering a bold plan to reduce student debt (now at a staggering $1.2 trillion nationwide), offer more financial aid and a free meal plan to needy students, cut the football program’s budget (Heresy. Let the students eat Ramen!), and take on the elected officials who keep taxes low while tuitions remain high, the University sanctions the creation of a food bank! And decent students, loving their peers and fueled by a fervor to do good, stock the shelves with donated canned goods rather than occupy the Chancellor’s house.

During the course of a visit this past fall to Tennessee Tech University in Cookeville, I was given a tour of the TTU Food Pantry by Kaitlin Salyer, the project’s manager and a recent Tech graduate. Coincidentally, this food pantry began operation the same month and year as the one at Ole Miss. Since that time it has served about a thousand people.

The pantry’s physical space occupied a corner of a large community room located in a nondescript campus administration building. The food was mostly stored in what looked like a large, former cloakroom. Since there was no refrigeration, all the donated items were canned and packaged. Volunteers would fill emergency food bags from among these items, but a large pile of Ramen noodles stacked outside the storage space came with this sign: “Take as many as you want.” Though the pantry subsequently moved to a larger and somewhat homier space, it is still hard to imagine how their inventory would allow clients to comply with the TTU Food Pantry motto: “Eat Well. Do Well.”

There is a striking similarity in how the campus food bank movement and the much larger U.S. food bank movement emerged. Starting with a relatively small number in the 1960s and 1970s, emergency food pantries grew rapidly in response to Reagan era social service cuts. They now number over 60,000, while the very large warehouse food banks have gone from 0 to over 200. As is the case with CUFBA, the evolution of local food banking required a national association, originally known as Second Harvest and eventually renamed Feeding America to provide further assistance, establish industry standards, and serve as a national voice for their members.

But more importantly, the similarities are reflected in each other’s language. We typically hear from both groups that, “food insecurity is an unfortunate reality,” that “the community comes together and volunteers to help others,” or in its more progressive frame, “we are doing what we can to connect our clients to services and programs like SNAP.”

What we rarely hear is any sense of authentic outrage, such as in a country as rich as ours’ no one should have to go to a food bank! Nor do we hear much in the way of shame or indignation from today’s college Presidents whose predecessors felt compelled during the Vietnam era to speak out against that senseless war, if for no other reason than to protect their students, their charges, their children, from a meaningless death.

One CUFBA member is Norwalk Community College in Connecticut. Community colleges and state universities make up a disproportionately large share of CUFBA’s members. This is not surprising since, as the above community college survey found, “one in five students have gone hungry at least once in the past 30 days due to lack of money.”

A statement on the Norwalk Community Foundation website provides a clear explanation as to why these numbers are so high: “Fifty-six percent of NCC students are the first in their family to attend college. Twenty-seven percent are parents. Only 33% can afford to attend full-time. Many of our students struggled or dropped out in other academic settings. It is a hard road and we want our NCC students to stay the course and graduate.” Which is why the Foundation does what it can to provide scholarship support.

It is also why the college established an on-campus food pantry. Rachel DiPietro, a 2012 Norwalk Community College graduate returned as an AmeriCorps VISTA volunteer to successfully perform that task. Her statement about why she did it paints a vivid portrait of what it means to be a student at a community college: “Every item makes a difference to someone—from the student who came in because she spent the night in her car and wanted to grab a toothbrush and toothpaste to feel more confident showing up to class, to the student who saves $60 a month by using the pantry, which has allowed him to work one less shift and study more.”

Leave Norwalk hugging the Connecticut shoreline along Interstate 95, and pretty soon you’ll run into Yale University. Better known for the number of world leaders it produces than the number of first in their family to attend college, Yale grows a $23.9 billion investment fund (2014) that generated a market-leading, mind boggling 13.9 percent per annum return over the past 20 years. NCC’s $27 million endowment puts it in the one-tenth of one percent category (of Yale’s endowment that is).

With sufficient resources to keep the future masters of the universe well-clothed and fed, Yale does not have a student food bank. It does, however, have a Real Food Challenge initiative that advocates for the purchase of food that expresses values of fairness, humane treatment of animals, sustainability, and economic justice for farmers and food chain workers. Yale is home to the Yale Sustainability Project and a student farm.

The University also has the distinction of being the place where the campus food revolution’s “shot heard ‘round the world” was fired when Alice Waters’ daughter entered the soon to be “renowned dining hall” of Berkeley College. Mom, it turns out, was not pleased with the common’s common fare, and proceeded to castigate, instigate, and agitate for what became the Yale Sustainable Dining Project. Having eaten one meal as a guest of Berkeley, I can only recall four or five meals in my life that surpassed it which is why I must agree with the college’s slogan: “Life tastes better in Berkeley!”

Am I suggesting that Yale and other institutions of its ilk take responsibility for “fixing” food insecurity at Norwalk Community College, Tennessee Tech, Ole Miss, or any of the other nearly 300 CUFBA schools? While more powerful institutions speaking up for their less powerful brethren might be helpful, I could foresee a tangled list of reasons why direct forms of outside intervention may not be practical.

Maybe campus food insecurity is an issue that students themselves should own. While mobilizing their peers to get to the bottom of why some members of their generation are sleeping in cars may not be as sexy as convincing the dining service to offer free-range chicken, it may lead to solutions that strike at the heart of America’s most fundamental problems.

Perhaps student-led food organizations like Real Food Challenge can embrace a food action agenda that places student food security on the same level as the other standards for buying food that they are now working for across 200 campuses. California State University system has been one of the most positive respondents to the Real Food Challenge initiative, and it has now recognized the severity of food insecurity among its students. They seem willing and able to work for “real food” as well to make good food a reality for all their students. Anim Steel, Real Food Challenges Executive Director, told me in an email that “a CalState (sic) Real Food Challenge team is starting to develop proposals, and it’s likely at least some RFC affiliates will develop initiatives related to food insecurity on campus.”

There’s the making of a dangerous divide at America’s institutions of higher learning. One class of students are moving ever further up the food chain to meals that are so loaded with virtue that heaven itself is chagrined, while another class of students are left to bottom-feed on Ramen. Since this divide mirrors the even greater income and wealth disparities of American society, campus food insecurity will not be resolved by starting more food pantries. But just as younger children must pass their school days adequately nourished to ensure their readiness to learn, we must ensure that college and university students have the food resources they need to succeed. Until the policies of America’s political system shrink the nation’s income and wealth divide, we all have a responsibility to “fix” food insecurity on our college and university campuses. And if it means showing a little rage, so be it!