The Alaska Airlines flight dips over Cook Inlet on its approach into Anchorage. The sunlight is reflecting off of distant glaciers and the cupcake glaze of snow-topped islands. My watch tells me it’s 10:30 p.m. but the midnight sun is as bright as a summer noon in New Mexico. 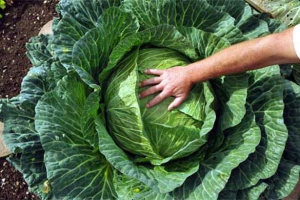 It’s easy this time of year to be drugged by the omnipresent sub-polar light and the glistening line of saw-toothed mountain peaks. Pretty soon, however, a food system guy like myself wonders how people get their food. Sure, my credit card bought me a sumptuous grilled salmon dinner, a fish so abundant in the surrounding waters that each Alaskan household is entitled to catch 25 big ones a year, provided you can endure standing in chest-deep, ice-cold water. So when the thermometer hits 20 below and the food barge is iced in; the weather is keeping bush pilots grounded and not able to service road less villages; milk is going for $9.00 a gallon and you’re salivating for some fresh greens; and yes, there’s wild game everywhere but you haven’t hit a live animal with a harpoon since that time you almost speared the assistant track coach with a wayward javelin toss, then what?

Alaska possesses more than its share of food system idiosyncrasies – a short growing season, beaucoup summer light, remote locations, and supply chains that stretch 4,000 miles to the lower 48 states. But in the course of talking with members of the Alaska Food Policy Council and other food system stakeholders, I began to wonder if Alaskan’s unique forms of adaptation held lessons for those in gentler climes. The relationship between resiliency and climate change, links between sustainability, non-renewable energy and the social welfare system, and the role that “wild” food plays in the state’s food system started to feel strangely prescient to me. 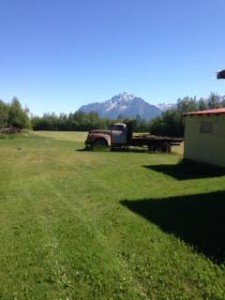 If you want a first-hand look at Alaskan agriculture, sign on to a half-day trip with Alaska Farm Tours. If you also want to experience some poignant history, sign on to their Matanuska Valley Tour in Palmer, located about an hour northeast of Anchorage. The tour’s owner/operator is the feisty – and as of this June, very pregnant – Margaret Adsit, who also works for Alaska Farmland Trust. As such, she’s both knowledgeable and passionate about the state’s farm scene.

You’ll learn that 20 hours of daylight allows a cabbage to reach six-feet in diameter and concentrates the sugars in carrots to such a degree that it makes them insanely sweet. Think you have problems with raccoons or woodchucks? Try keeping a 1500-pound moose from eating her way through two-acres of vegetables. And while it stands to reason that Alaskans will use season extenders like hoop houses, the state’s farmers use more USDA high-tunnel subsidy funds than any other state in the country. (See Hodges and Meter Food in the Last Frontier).

In 1935 someone in FDR’s Emergency Relief Administration got the bright idea to relocate some of the Depression’s dispossessed farmers to the Matanuska Valley. Over 200 “volunteer” families from Michigan, Minnesota, and Wisconsin said goodbye to their friends and took up residence in a place where they had been promised 40 acres, a house, and bulldozers to ready the glacier-carved forest land for farming. The land was there but nothing else. They were forced to live in tents and clear the land with horses. Within five years half of the families left their allotments, and by 1965 only 20 of the original families were still tilling the soil.

In spite of the hardships – and the unlikely prospect that the colonists would ever again vote for a Democrat – farms took root, some prospered, and today the Matanuska Valley is a little agricultural gem enveloped by a stunning ascension of snow-streaked mountains. We visited the last farm that is owned by a descendant of the original families, fifth-generation Don Church, who with his wife Michelle, operate Moonstone Farm. On a day as exquisite as the one I saw Moonstone, transfixed by a gun-metal grey peak that appeared to breach whale-like from the far end of a sweet little hay field, for a few dangerous moments I imagined myself homesteading in such a place. But when I heard how the plastic was ripped off the greenhouse hoops by the razor-like winter wind, how human eyes can freeze shut at 20 below, and that the catcher’s mitt-sized hoofs of a moose can turn rows of carefully nurtured vegetables into zucchini pulp, I quickly let go of the fantasy.

The Role of Subsistence

There are only 750 farms in Alaska. Even with the addition of a small portion of Alaska’s $4 billion commercial seafood catch (the vast majority is exported), Alaska must import over 90 percent of its food. In its premiere issue released this June Edible Alaska spotlights a farmer who uses float planes to transport goats, and another who must wait for high tide before he can motor his skiff filled to the gunwales with produce to market. Though gyrations like these don’t compensate for Alaska’s shortage of agricultural advantages, its ecosystem makes up for it by setting nature’s feast before those who can hunt, fish, and gather. “Wild food,” as it is called, is at the core of what Alaskans recognize as subsistence, which is defined by the Alaska Department of Fish and Game Division of Subsistence as the “customary and traditional uses of wild resources for food, clothing, [and] fuel…”

Marylynne Kostick, a soft-spoken research analyst with the Subsistence Division, gave me a tutorial on this complicated and contentious subject. Though blessed with the physique of a runway model, Marylynne’s skill sets suggest she’s more at home in the woods than in the fashion world. When she’s not preparing charts that explain the hunting breakdown between land and sea mammals, she devotes her free time to sun drying fish, rendering bear fat, and stretching moose hides. The accompanying photo of the beautiful bowl of food is actually “roadkill hare stew” which she explains is “another aspect of the ‘food system’ that shouldn’t be discounted. With so many wild drivers…and the hare population on an up cycle this year, the poor things are under attack…. Best to take them home and teach some kids to properly care for and inspect a wild animal.” (I later discovered that about 800 Alaskan moose die annually from collisions with motor vehicles. Groups have stepped up to remove, process, and distribute the meat from these poor critters to charitable feeding sites).

Through numbers and words, Marylynne makes it clear that “wild foods” are a critical part of rural Alaska’s diet. Taken together, she tells me, walrus, seal, whale, sea lions, moose, caribou, bears, Dall sheep, mountain goats and of course fish and shellfish, provide rural Alaskans (125,000 people or 17 percent of the state’s population) with an average of 189 percent of their protein and 26 percent of their caloric intake. The absence of any reliable pricing makes it difficult to determine the market value of this food, but using estimates of between $4 and $8 per pound, the range in 2012 was between $147 million and $295 million per year.

The conflicts surrounding wild foods stem from their dietary importance and a competition from non-subsistence uses such as sports hunting and commercial fishing. As Marylynne explained to me, a big part of her division’s job is to make recommendations to the state’s regulatory boards that will determine who can harvest what animal using which method, and where and when they can do it. Making the task even more difficult are federal subsistence regulations that further complicate the game of wildlife management. And in Alaska, subsistence users who are primarily Native Alaskan and rural have the highest claim, and as such “their rights would trump those of sports and commercial users,” in the event that the fish and game population dropped below subsistence levels. So far, this hasn’t happened. 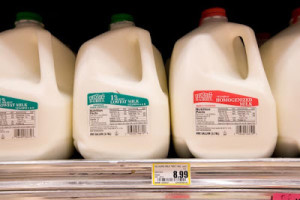 But like the swelling chords of a cello that signal the approach of some dark force, Alaskans are starting to hear ominous notes of climate change floating ashore. While still somewhat anecdotal, those who gather wild berries, another favorite “wild food,” are reporting that the harvest of some varieties has moved 25 miles north due to warming temperatures. A species or two of fish common to more southerly waters are starting to appear off Alaska’s coast. And those who hunt walrus say it’s getting harder to do so due to the absence of ice floes on which the sea mammal perches.

In one curious twist on indigenous peoples’ cultural practices, food banks are becoming popular above the Arctic Circle, a region where the wild food harvest equals 438 pounds per person. Why? Native hunters have a spiritual connection to their prey. If the animal doesn’t “present itself” to the hunter, as if to say “I am allowing you to take me to feed your family” then the gun is not fired nor is the harpoon released. According to some people I spoke with, Native Alaskans may be turning away from subsistence hunting in favor of the food bank because it is “presenting itself” to the people in the same way that a hunted animal would.

Concerns arise as well around the future of Alaska’s limited farmland. Development pressure is keen and during the tour of the popular Matanuska Valley it became obvious where future housing would go – on farmland which is fetching $20,000 to $30,000 per acre.

Another potential fall from grace has been playing itself out in the state’s legislature this year. Since 1973 Alaskan residents have benefited from the creation of the Permanent Fund Dividend (PFD) which was the state’s way of sharing the North Slope’s oil wealth. Not only were state government’s coffers filled by the revenues, each Alaskan received an annual check averaging around $2,000. This wealth distribution scheme has been credited by some economists with giving Alaska a more equal wage distribution (less income inequality) than the rest of the U.S. However, state revenues have fallen precipitously in response to falling oil prices, plunging the state into a budget crisis, one that is likely to drastically reduce the PFD. The lesson, I suppose, is that what oil giveth, oil taketh away, to say nothing of what oil leaveth behind in the form of more carbon emissions.

Still, like everywhere else, the local food movement shines across Alaska bright as the midnight sun. Communities in this vast state are creatively maximizing their man-made and mother nature-made resources. The Alaska Food Policy Council has had success with legislative and administrative action to support the growth of their local food economy. There’s even been progress in social justice, not a field in which Alaska typically excels. According to Sarra Khlifi of the Alaska Food Coalition, a group affiliated with both the food policy council and the Food Bank of Alaska, the legislature this year suspended a lifetime ban on food stamp eligibility for convicted drug felons, surely a draconian measure if there ever was one.

How Alaska copes with its multiple food system vulnerabilities bears watching. Resiliency in the face of climate change will take on new and challenging dimensions in this highly exposed northern reach, not the least of which may be the hot, sweaty hordes escaping from the Lower 48. The lessons of oil, the lessons of subsistence, the lessons of the limits of human endurance, and the lessons of public policy that can be farsighted or shortsighted should not be ignored because they come from a place as remote as Alaska.