Taking Back a City the Green Way 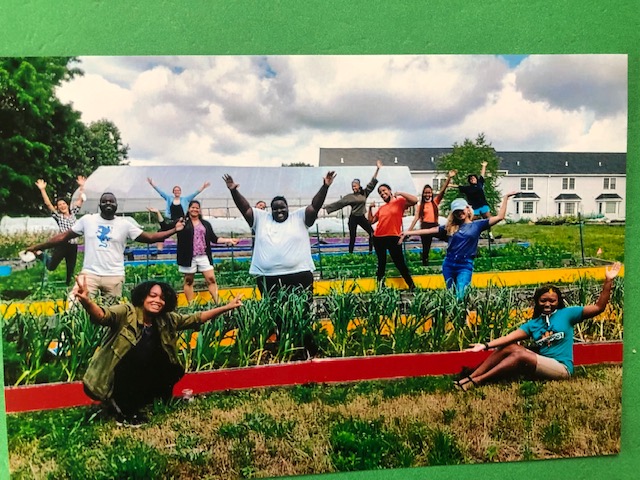 During my 25 years of community food organizing in Connecticut, I developed a special place in my heart for the city of Bridgeport. Squatting on the state’s coastline at the narrow end of Long Island Sound within shouting distance of New York City, how could I not love a place that never gave me a satisfactory explanation for its existence. Lacking anything that one might call an urban plan, it felt like every major state thoroughfare—train tracks, highways, even old wagon trails—were required to pass through Bridgeport. If I wasn’t on an off-ramp, I was probably off an on-ramp struggling to find reason and direction through a brutalized landscape of institutional architecture.

It seems only fitting that the master of make believe, P.T. Barnum, was Bridgeport’s most famous citizen. That is until its former mayor, Joe Ganim, became its current mayor after serving some hard federal time for political corruption during his first term. Running for his post-prison term in 2016, his slogan was “Give me a second chance.” Like much of Connecticut’s sympathetic electorate, Bridgeport’s can’t help but grant redemption to fallen politicians. Too often, that’s all there are.

Whether it was sympathy for the underdog or the devil, I found myself once again drawn to the hardscrabble neighborhoods of Connecticut’s most populous city (145,000 est.). The lure was a particular urban food project called Green Village Initiative (GVI) that, according to a former Connecticut colleague, was “doing everything right.” After getting off a wrong highway ramp, I finally found myself sitting with a dozen young people, all well south of 40 years of age, at picnic tables shaded by pop-up tents in the middle of a gorgeous urban farm.

Unlike me 20 years ago when I struggled to help a few food activists in Bridgeport organize one farmers’ market and an isolated community garden or two, these youthful food warriors and their partners have established seven farmers’ markets, a dozen community gardens, including the large Reservoir Community Farm where we’re sitting, 23 school gardens, several food and farm businesses, and a host of education and training programs. The nonprofit GVI and its wider collaborative of local organizations have accomplished much of this with support from a four-year, $400,000 USDA Community Food Project (CFP) grant that is now entering its last year of funding.

But “outputs” like these only tell part of the story. The rest of the narrative can be heard in the participants’ laughter that rolls across the garden with enough force to drown out the din of passing traffic. It’s also evident in the pride they have in their place and their sense of purpose. Tokina Pollock Shafer is a twenty-something woman who manages the farmers’ markets and grew up in Bridgeport. She told me that, “When I was young, I wanted to live anywhere but Bridgeport. But now, there’s a lot of life here and more people are choosing to stay.”  And contrary to some notions that farming has little attraction to urban youth, another staff member, Elisha Brockenberry, said, “People think of me as a farmer; they even call me ‘Farmer.’ Seeing yourself as a farmer is great and if others see me that way, that makes me feel good!”

Today’s community food project creation stories often begin with an acknowledgement of whose stolen land they are working or living on. In the case of this Reservoir Farm—whose surrounding neighborhood is also known as Whiskey Hill for its nefarious goings-on during Prohibition—Farm Manager Catherine Lindsay tells me that these are the ancestral lands of the Golden Hill Paugussett Indian tribe. The site’s more recent history tells a tale common to many U.S. cities that fell victim to deindustrialization, growing income inequality, racism, and white flight. As Bridgeport’s wealthier classes abandoned the city in the 1970s and 80s, building vacancies and demolitions increased, leaving behind orphaned pieces of land such as the one we’re standing on. Relegated to an underutilized city-owned parking lot, GVI took over the site in 2012. With substantial assistance from USDA’s Natural Resource Conservation Service (NRCS), they installed irrigation lines, covered the tarmac, and constructed raised beds.

The transformation is stunning. Not only does GVI and its Youth Leadership cohort grow 3,000 pounds of fruits and vegetables on Whiskey Hill, it hosts 45 community garden plots used by surrounding neighborhood residents. A moderate size hoop house helps them with seedling production and season extension, but as Ellie Angerame, GVI’s executive director, points out, it’s a perfect experiential learning resource for the many Bridgeport school children who come to the farm. “They already know a lot about global warming, but when they step inside the greenhouse and feel the temperature difference, they have a major ‘aha!’ moment.”

The heartbeat of GVI and its many projects and collaborators, however, is the Reservoir Farmers’ Market, whose welcoming kiosk serves as the farm’s gateway. Operating seasonally on Saturdays, what distinguishes this market from any other one in the state of Connecticut is that it’s the only place where you can get “all Bridgeport-grown” produce. While that degree of hyper-locavorism may not excite everyone, it’s a source of pride for the wider community and the three Bridgeport-based farms that make up the collaboration.

Besides the nonprofit GVI/Reservoir Farm, Park City Harvest and Blissful Awakenings are for-profit, small-holder urban farms owned and operated by African-American farmers. GVI has contributed to their success not only by providing the marketing space (the market also accepts numerous incentive programs like doubling the value of SNAP purchases), but also through a wide range of business training services that assist with the development of new, local food enterprises.

“Poverty is real and hunger is at the door,” is how Ellie stakes out the reality facing a Bridgeport community whose poverty rate is 26 percent—over 150 percent higher than Connecticut’s. Standing in the middle of the farm, surrounded by an abundance of collards, okra, peppers and strawberries, you only have to cast your eyes a couple of blocks in any direction to see how close this food paradise is to a surrounding food purgatory. Reservoir Avenue is mostly a sidewalk-less road to the farm’s east that plunges steeply downhill through a working-class neighborhood for one mile before it reaches the Food Bazaar, the area’s closest supermarket. “Bridgeport was built for cars,” says Ellie, and describes harrowing scenes of elderly people negotiating the road in electric wheel chairs to go grocery shopping. If there’s a term “pedestrian-hostile” in city planners’ lexicon, this area is a textbook example.

Against this backdrop, GVI and its network of gardens, farmers’ markets, food businesses, and educational programs constitute a beachhead in the battle for a healthier and greener Bridgeport. But fighting your way off the beach is never easy. Ellie related a conversation she had recently with a member of Connecticut’s U.S. Congressional delegation who complimented her on GVI’s good work but then served up the familiar trope that “urban agriculture can’t feed a hungry world.” Similarly, in a kind of fastidiousness from public officials who rarely apply the same standards to other projects, urban gardens are sometimes criticized for being “untidy.” Nature can be unruly, yes, but the nearby road construction site adding yet another lane to the state highway system will neatly and invisibly pump more carbon emissions into the region’s already marginal air-space.

What GVI amply demonstrates—and what I’ve come to learn over the course of 50 years of community food work—is that urban agriculture should be recognized as both an insurance policy as well as for the many benefits it provides. If the pandemic has an upside, it’s that more of us have become aware of the vulnerabilities of the U.S. food chain. In light of those facts and past ones (e.g., catastrophic weather that knocked out transportation systems) and future ones that appear more likely as a result of climate change, wouldn’t every community want as many “Plan B’s” as possible? Given GVI’s numerous food production and distribution sites, current land resources, and the horticultural competency it is developing among its youth and other residents, Bridgeport should fare better than other comparable communities as disruption in the food system become more commonplace.

But that’s only the food production benefit. Urban agriculture serves numerous functions that don’t readily reveal themselves at the farm stand. Study after study affirm that community gardens, urban farms, and other green spaces reduce crime and mental health problems such as depression. When Briana Wahl, GVI’s operations director, says “It can get violent in Bridgeport, but this farm is a peaceful oasis,” she’s acknowledging urban living’s challenges and opportunities.

Urban agriculture also improves the environment due to better air quality, lower heat radiation, and better water filtration and absorption. The economic benefits include higher property values for homes near gardens as well as more income for those who pursue urban gardening as a small business venture. Though harder to measure but perhaps more importantly, the educational and cultural impact of gardening, especially in urban areas with limited places to engage nature, is immense. As the Jamaican gardener exchanges seeds and plants with the Japanese gardener who exchanges planting methods with the Puerto Rican gardener, and as each share information with younger generations (and vice versa), the world becomes a dramatically more interesting and richer place to dwell.

“Our CFP grant allowed us to promote business opportunities for Bridgeport people,” Ellie tells me. “It also made our farmers’ market more welcoming and inclusive, and kept them well-stocked with Bridgeport-grown food.” In a larger sense, as GVI and its partners claw their way off their beachhead with hopes of making the values of a local food system more prevalent, Ellie also noted that “the CFP gave us clout.” Perhaps that’s not surprising since respectable sums of money can make people pay attention to you, but it’s especially important in Bridgeport, where GVI has been slowly earning credibility among various city groups and institutions. Clout can equal real change.

Though the federal grant program can have a big impact on cities like Bridgeport, Ellie also echoed concerns about the CFP administration process that I’ve heard time and again from other grantees. The accounting process is unnecessarily detailed requiring an excessive amount of itemization which, at times, detracts from the larger purpose of the program. GVI doesn’t have a dedicated grant writer or development person. Raising money is just one of Ellie’s duties as well as managing the grant reporting process. Fortunately, GVI has also drawn support from other donors such as the Newman’s Own Foundation and the Fairfield County Foundation. But she shares with me, having taken the ED job a little over a year ago, that she almost didn’t accept the position because of CFP’s burdensome reporting requirements. That would have been a terrible loss for Bridgeport, which needs all the enthusiastic and talented young people it can get.

Bridgeport is one of those creaky old cities whose gears are turning once again with just enough speed to shed the rust. Born-again politicians are working with their more imaginative citizens to reinvent a city whose bones are strong but sorely in need of some healthy flesh. A robust local food system, inspired and shaped by hard-working and visionary young people, can build strong communities twelve-ways. In the case of Bridgeport, the Community Food Projects grant to GVI is providing essential nutrients for the process while building bridges between local change agents, city hall, and the community. The future is looking good.

*This is the fourth of five stories about USDA’s Community Food Project Grant Program (CFP). All four stories so far have focused on past and current grantees—Missoula, MT, New Mexico, Lexington, KY, and Bridgeport, CT—who have used these funds to reshape their respective food systems. To see previous stories, go to www.markwinne.com. The fifth and final story will look at the future of CFP.