The Daily Table: Is This What We Really Need? 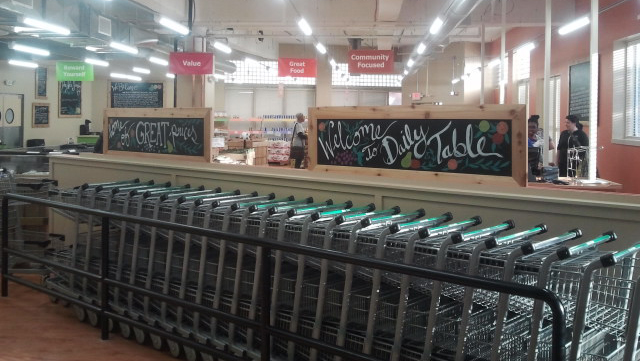 The Daily Table in Dorchester, Massachusetts

There’s a new kid in town, who, like the new kid before him and the kid before  her, is stirring things up. He’s saying things differently than those who preceded him, and his new ideas are making some people feel a little uncomfortable. In the parlance of the much-admired entrepreneurial class, he’s a “disruptor.”

The new kid is Dave Rauch, the former president of the beloved Trader Joe’s. His new idea is the Daily Table, a non-profit grocery store that opened in Dorchester, Massachusetts in early June. The Daily Table is located in a low-to-middle income area which has not enjoyed much success attracting conventional supermarkets. Relying largely on the donation of “seconds” – food that is edible and safe, but just beyond its expiration date or a few days shy of the compost pile – Daily Table is, according to CBS News, “on a mission to solve two problems: preventing tons of food from going to waste and offering healthy alternatives to families who may not be able to afford traditional stores.”