What I Learned from Idaho

“Work and learn in evil days, in insulted days, in days of debt and depression and calamity. Fight best in the shade of the cloud of arrows.” Ralph Waldo Emerson 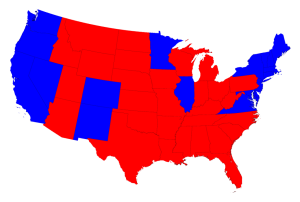 Despair set in about 3:00 a.m. Mountain Time as the states that were supposed to fade to blue flared finally to red. An hour or two of restless sleep became an exercise in futility as the consequences of a Trump victory detonated in my skull – demise of health insurance, the Wall, a Supreme Court packed with knuckle-dragging conservatives, coal-fired power plants and gas pipelines from sea to rising sea.

In the not-so-clear-light of day, W.B. Yeats’s oft quoted line came to mind: “The best lack all conviction while the worst are full of passionate intensity.” Whether the “worst” are Trump supporters is perhaps less important than what the “best” do next. To that end I want to share some convictions that I acquired recently from, of all places, Idaho.

To say that Idaho is a “red state” is, of course, an understatement. I think the TV networks called the state’s presidential vote for Trump before the polls even opened – after all, Idaho Democrats hold a none-too-robust 17 percent of the state legislature’s seats. Boise City Councilwoman Lauren McLean (Democrat) told me that when the council voted to ban plastic bags, the state legislature pre-empted municipal authority to make environmental regulations. The state legislature was more interested in upholding Idaho’s number-two ranking as the nation’s most “business friendly” state, and possibly surpassing number one ranked Utah.

There are many other Idaho-isms that don’t recommend it easily to progressives. For instance, it is one of the few states that still has a food tax. The Town of Greenleaf, less than an hour from Boise, garnered international acclaim in 2006 when its town council passed an ordinance “asking” all residents to keep firearms in the event that they might be overrun by refugees from Hurricane Katrina. Idaho is also home to the fast-food frozen French fry king, J.R. Simplot, and factory dairy farms that use up cows and the environment to churn out vast globules of processed cheese product.

So, what was I doing there? I had been invited to speak to the Idaho Hunger and Food Security Summit and to conduct a training for the state’s local food councils and coalitions. During that time, I got in front of about 300 food, farm and health activists, and much to my surprise, I came away with the strong impression that, in spite of Idaho’s iron-clad conservative credentials, the local food and food security movement is carving out some meaningful space for itself.

The Boise area is a local food oasis with other Idaho towns and regions not far behind. There are excellent farm-to-table restaurants – check out State and Lemp Street in Boise or Horsewood in nearby Caldwell. Edible Idaho is chock full of stories and ads depicting a smorgasbord of local delights from the Boise Co-op to Idaho’s vodka

(potatoes aren’t just for French fries). The Idaho Farmers’ Market Association coordinates 48 farmers’ markets around the state including a Boise mobile farmers’ market that makes 11 stops each week at sites serving seniors. Boise High School offers a progressive environmental curriculum that includes a well-tended student farm a few blocks from their main campus (the school also hosts a local food security summit every two years). On the day that I visited, teacher Ali Ward was directing about 30 shovel-bearing students preparing the soil for a winter cover crop planting (when not directing shovel-wielding young people, Ali plays band saw and washboard in a local band). And just in case you were worried that the state’s large Mormon community (24 percent of Idaho) might restrict alcohol access, local microbrews, wine, and several new hard cider labels, fueled by thousands of acres of nearby hops, vineyards, and orchards, tempt even the soberest citizens with tasting rooms and beer festivals.

Even the briefest of Idaho’s food scene tours would be incomplete without a tip of the hat to long-time food activist and farmer, Janie Burns. Starting in 1989 on her Canyon County farm with seven chickens and first-day-ever farmers’ market sales of $27, Janie has been growing food and raising animals while developing projects and raising a little Cain. She and her sidekick, local educator Susan Medlin, co-founded the Treasure Valley Food Coalition which has launched a number of initiatives, including the 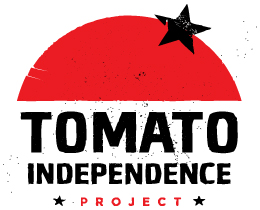 “Tomato Independence Project.” This was a three-year community venture whose galvanizing slogan “End the tyranny of the tasteless tomato!” ignited a firestorm of enthusiasm for local food.

The project encouraged people to plant tomatoes everywhere – public as well as private spaces – take tomato-growing classes, save seeds, make sauce, celebrate “Tomato Tuesday,” read the book “Tomatoland,” and learn about the injustices that farmworkers face. Thousands of people got on board, especially when they hosted a “Bloody Mary” event that combined local tomato juice with, you guessed it, Idaho vodka! “The whole tomato project was the coalition’s way of showing people they don’t have to feel helpless when it comes to their food,” Susan told me.

More recently, the coalition has been running a series of forums on the loss of the Treasure Valley’s farmland, clearly an issue when red-state sensibilities clash with blue-state sensitivities. The roughly 30-by-100-mile valley’s beautiful, irrigated farms and deep bottomland soils are under siege from developers and an expanding home buyer appetite for still-moderately priced housing, a pleasant climate, and an endless horizon. Janie, who’s possessed of an elegant syntax, refers to all of this as “lovely sprawl” that’s filling Boise’s fringe with “upper-crusty, McMansion-nee” homes. Recognizing the current limits of Idaho food activism, she said, “There is a surge of interest in local food and food security, both from the public and the marketplace, [but] we all learned long ago to keep our heads off the skyline and avoid poking the bear.”

As much as local IPAs and heirloom tomatoes improve my quality of life, they don’t do a lot to stem food insecurity. That is why the Idaho Hunger and Food Security Summit has held its biennial conference for the past 12 years. This year the one-day event delved into six broad topics ranging from anti-hunger advocacy to childhood nutrition to, yes, local food systems, which, interestingly, drew the most people. Protecting the programs that protect Idaho’s most vulnerable citizens, e.g., SNAP and child nutrition recipients, and recognizing the multiple values associated with local food are a high priority for a small but passionate crowd of Idaho food activists. Having decided to “poke the bear,” keynote speaker USDA Under Secretary Kevin Concannon told the audience we must have a higher minimum wage to reduce hunger. To make the link between local food and food security, Concannon proudly noted that 7,000 of the nation’s approximately 8,500 farmers’ markets accept SNAP.

As I was listening to the proceedings I couldn’t help but think of the town of Wilder, Idaho, that I visited on the previous day’s farm country tour. Nestled in the middle of ever-expanding hopyards and vineyards, Wilder is 76 percent Hispanic, has a 32 percent poverty rate, and 94 percent of its school children qualify for free- and reduced-price lunch (49 percent is the state average). In short, Wilder is one of the poorest towns in Idaho, and its residents are largely agricultural workers. Wilder’s residents are the foundation of Idaho’s booming farm economy, yet their children may never have the chance to leave the fields that literally surround them. As of now, their critical lifelines are federal food programs.

But food programs may not be Wilder’s first worry. If Trump follows through on his Draconian plan to deport undocumented immigrants, Idaho’s Hispanic community and agricultural businesses would suffer disproportionately to the rest of the nation. According to the Idaho Statesman (11/12/16), one-fourth of the state’s agricultural work force could be lost, and more important, children could be separated from their parents.

Residents of Wilder may also work at the J.R. Simplot plant not more than 30 minutes away. But due to a technology overhaul, the potato processing plant went from about 1,000 workers to 185, leaving redundant workers with nothing but seasonal farm work. Ironically, the good food economy may begin to replace the not-so-good food economy. Chobani Greek Yogurt opened a new plant in 2012 in Twin Falls, Idaho, with the goal of employing 500 people (they did vacuum up about $55 million in public subsidies in the process). Hot on Chobani’s heels is the organic snack food giant Clif Bars, which is opening a $90 million facility, also in Twin Falls, that will employ 250 workers.

Food security advocates are joining forces with local foodies in the form of a Double-Up Food Bucks program (funded in part by the City of Boise) that is connecting SNAP recipients to 13 farmers’ markets around the state. Farm-to-school programs, lots of food and nutrition education from the University of Idaho Extension Service, and innovative gardening programs are bringing more of the state’s food vectors into alignment.

But perhaps the most telling connection was the Hunger Summit itself. By making the local food system a conference focus, bridges were built between different elements of Idaho’s food movement. As Janie Burns observed, “I suppose the best way to describe food work in Idaho is to compare it to a quilt. We are each still making our own little blocks and squares. Occasionally, we get to make new squares and even sew two together. [The Hunger Summit] was a great start to that effort.”

If there was ever an excuse to drown my sorrows in locally produced alcohol, the morning of 11/9 was it. But I didn’t have a chance to indulge the urge. At 7:13 a.m. that morning I was on a train to the Albuquerque airport for a week’s worth of trainings. At the next stop, 40 rambunctious third graders, most of them Hispanic, climbed on board with a dozen teachers and chaperones and decided to sit in the car I had had virtually to myself. Their exuberance belied the previous night’s outcomes and the misery that enveloped me. Their giggling, optimistic presence reminded me that they are the future, but a future that may be circumscribed by a vicious border wall, and further diminished by rising seas and temperatures unless we adults “fight best in the shade of the cloud of arrows.”

To that end, I offer three prescriptions for these “insulted days.” First, prepare to resist the infrastructure construction that affronts our planet and our humanity. Walls do not good neighbors make, and pipelines only hasten the earth’s demise. Second, fight like hell to protect federal food programs from what is an all-but-certain attack. The biggest beneficiary of SNAP, school meals, and WIC are children. They could become the biggest losers. And lastly, seize upon the joy, community, and economic vibrancy available for the taking in our growing local food systems. Whether you’re in Berkeley, Boston, or Boise, partaking of the local feast is the gift that keeps on giving.