“Where Do People Around Here Get Their Groceries?” 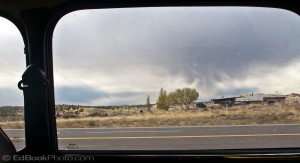 r more than an hour at 70 mph down an arrow straight country road in southwestern New Mexico, I was perplexed by the fact that not only had I seen so few homes, but I was still in the same county! In those beautiful, wide-open spaces where the cattle greatly outnumber the people, one doesn’t need a highly developed food consciousness to ask the question, “Where do people get their groceries?”

Food access, food insecurity and food production are concerns now being taken up by a growing number of food policy councils emerging across rural America. Though densely populated areas of the country face similar issues, the physics of time, distance, and human proximity present rural America with a decidedly different set of challenges. The four New Mexican counties that hug the Arizona and Mexican borders – Luna, Hidalgo, Grant, and Catron – where I journeyed recently contain a scant 62,000 people spread across 17,300 square miles. By comparison, the states of Maryland and Delaware have a combined 6.9 million people packed into 14,400 square miles.

There are consequences to living in places where people are few. In Luna County a Senior Meals on Wheels volunteer must drive for an entire day to deliver food to 12 separate homebound seniors. Residents of Catron County travel up to one-and-a-half hours to get to a full-service grocery store, while people living in Hidalgo County’s 3,000 square miles (bigger than Delaware) are only served by one supermarket.

It may be glib to say that rural America contains less of the good things and more of the bad things, but the numbers often suggest that story. Statewide, New Mexico’s metro areas have a poverty rate of 14.5 percent, but its rural areas are at 17.7 percent. Silver City, located in Grant County derives a dubious benefit from one of the largest open-pit mines in the world. While their well-paying mining jobs rise and fall with the price of copper, toxic residues carried in the form of air-borne particulate matter and groundwater pollution are persistent facts of life (and sometimes death). And due in large part to the paucity of many basic necessities and good work opportunities, rural areas are losing population, especially the young, and the remaining population is growing older and in need of more services.

But there are places in America that are even more rural than rural. Hundreds of counties, most of which are found west of the Mississippi River, also carry the designation of “Frontier.” Though it’s a term that evokes images from the Wild West, frontier status is based on criteria developed by academics and government agencies that identifies a place with very low population density. However, the criteria also includes abnormally long driving times to health services and commercial market areas. Suffice to say that frontier counties have the fewest people and the greatest gaps in the availability of goods and services. As one Grant County food activist put it, “Even our dumpsters have less food than other places.”

Fewer people per jurisdiction also translates into less political clout. Because the combined population of all U.S. frontier counties represents only two percent of the entire country’s voters, it goes without saying that the federal and state governments have to turn up their hearing aids to detect those distant voices.

Except for a small portion of Grant, all four counties that have joined together as the Southwest New Mexico Food Policy Council are frontier. This is a good part of the reason that the National Center for Frontier Communities, based in New Mexico, has provided “backbone” support for this regional coalition. The other big reason is simple political math – four low-population counties working together have more power and resources than any one of them alone.

The NCFC came into existence in 1997 to focus on the limited access to basic services in rural counties. But like many advocacy organizations, they soon realized that food deserts (the American Rural Sociological Society has identified over 800 rural food desert counties) were associated with poor health outcomes. This awareness eventually brought them squarely into the food system camp where they began exploring the multiple links between diets, agriculture, health, and declining rural economies.

According to Susan Wilger, NCFC’s Director of Programs, about a year’s worth of planning work with representatives from all four counties preceded the final development of the regional food policy council. “Fortunately, there was an existing council and agencies in all four counties who were interested in working together,” she told me.

About five years ago a coalition of groups working on health issues in Grant County received a three-year Robert Wood Johnson Foundation “Healthy Kids, Healthy Communities” grant. A portion of the funds and a significant amount of resources went into forming the Grant County Food Policy Council which operates under the auspices of county government. The Council’s experience and the wisdom of one of its founders, Alicia Edwards, also the Executive Director of The Volunteer Center, a Silver City non-profit food organization, gave the nascent regional food policy council lots of “lessons learned.”

A tour of the Center’s state-of-the-art community food facility makes it clear how important concrete projects like this are to the larger task of achieving regional food security. Complete with a half-acre of vegetable gardens, over 70 fruits trees, community meeting and kitchen space, and an emergency food pantry, the facility is also a reflection of deep community support. “Some amazing things happen in this city,” Alicia commented deflecting the spotlight back on the community. “If people believe in your work, they’ll support you.” (In that regard I was particularly struck by one act of small town charity from a clothing thrift-store called “Single Socks” which has donated over $188,000 to anti-hunger work in Grant County since 2009.)

Everyone, in effect, understands their role: The Center offers a wide range of helpful goods and services; the Grant County Food Policy Council works with County government to ensure supportive public policies (at the council’s urging, the board of county commissioners recently agreed to purchase a $150,000 chipper to aid the County’s composting initiative), and the Southwest New Mexico Food Policy Council harvests the power and resources of four counties to research regional needs and organize more effective advocacy strategies.

To illustrate how region-wide research and advocacy can work, Alicia tells me a story about food insecurity – rural style. On a monthly basis a truck loaded with donated food from the Road Runner Food Bank (New Mexico’s statewide food bank) literally pulls up to a wide spot on a Catron County road where 100 or more people have been waiting for up to three hours. Without the benefit of buildings or infrastructure of any kind, a local church group unloads the truck and distributes the food in the open to the waiting families. “How crazy is that?” says Alicia.

With that information and an in depth analysis of the region’s emergency food distribution system by the regional food policy council, groups are now trying to make improvements. More sites, better efficiency, and higher quality (healthier) food are the goals that collaborators are working toward.

You learn a lot about a place when you sit and listen to people tell their stories. This was certainly the case inside the Hidalgo County DUI Building, the June meeting site for the Southwest New Mexico Food Policy Council. Entering a public facility ominously named for those who violate New Mexico’s driving and drinking laws makes one feel a little uneasy. Though none of the county’s 5,000 residents know me, I pull my visor cap over my face, just in case. But once inside I am greeted by a beautiful potluck lunch of fajitas and happy (but sober) people, some of whom have driven an hour-and-a-half to attend the meeting.

Amidst the chatting and chewing, the meeting’s discussion told the tale of how people pull together to solve problems, not only because they want to but because they have no choice. Emily Shilling from the Southwest Council of Governments reminded everyone that the rates of food insecurity among children and elders in the region were increasing, and that obesity was a problem. While most people nodded their assent, Cristy Ortiz from the Hidalgo County Food Coalition pointed to the progress being made from expanded farmers’ market programs (e.g. “Double-Up Food Bucks” for SNAP recipients), new AmeriCorps volunteers, and better coordination between food pantries and schools, all of which had connections to public policy and/or the work of the food policy council. Michele Giese from the New Mexico Health Department attributed the region’s five new mobile food pantries (monthly emergency food drops like the one described above) to the work of the regional council.

Several public officials were present or represented. They included the offices of U.S. Senator Martin Heinrich and the City of Lordburg’s mayor. Hidalgo County Commissioner Darr Shannon, whose family has been ranching in the county for 125 years, was passionate about how much work needs to be done in Hidalgo. She reiterated the concern that “children here are going to bed hungry,” but reminded everyone that the “county’s roads and housing are in poor shape, and we have parts of the county without clean drinking water.”

Perhaps the most telling comment came from John Allen, a New Mexico State University Extension agent for Hidalgo County and a member of the Hidalgo Food Coalition and regional food policy council. Noting how challenging it is to work in low-density places, he said, “There’s really only a handful of people doing stuff in Hidalgo, and most of them are in this room,” gesturing to the 20 or so people seated at the table.

Yes, John was teaching some nutrition classes in the public schools, but the county does not have a single “farm to table” restaurant, and healthy food at any of the existing restaurants is almost non-existent. Yes, there were some large farms in the county, but most of them were producing hay and corn for New Mexico’s factory dairy farms, and it was difficult to get these farms to produce fruits and vegetables for local markets.

Rural places may not have enough people to do everything that needs to be done, but the people working on food and farming issues are strong, smart, and committed. By turning “smallness” to their advantage they are using their easier access to decision makers to cultivate more supportive policies and better collaborations. Linking health and food, for instance, has been a powerful marriage that is already bearing offspring. And to the extent that connection can find a partnership with economic development, the marriage can prove even more fruitful (the council is also conducting a food hub feasibility study).

But rural America has also learned that no matter how good their people are, they need help from the outside. Forging bonds with nearby counties, state advocates, and federal officials are the actions that will multiply their fewer hands many times over. The Southwest New Mexico Food Policy Council has done this by forming a regional council, working closely with the New Mexico Food and Agriculture Council, and building strong ties to federal officials.

Though the practice of self-reliance may be woven into the fabric of rural America, its residents know that by the time the cavalry arrives it could be all over. Food system and food policy work are excellent places to hone a community’s collaboration skills – the benefits come quickly and often with real impact. Attention should be given to building this capacity, which in today’s world is a critical survival skill.