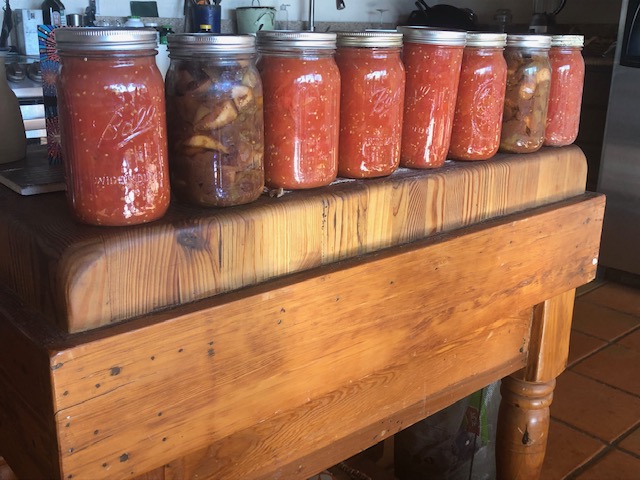 Finally pulling out of the steep dive that was COVID-19, do we dare ask ourselves if we’re healthier, wealthier, and wiser? Fortunately for me, the only lingering effect has been the Zoomacron variant that has tenaciously kept us enthrall to technology and seems strangely resistant to promoting human contact. I think it’s why I hunger for a boisterous food conference where comrades-in-arms are hugging and kissing, swapping spit and spirits, and trading stories and advice at a reception replete with local beer and wine!

Unnoticed by many, I continued a slow transition from semi-semi-retirement to semi-retirement—the only indicator of which so far has been more naps. I signaled this shift with a kinda-sort-of goodbye to the Center for a Livable Future at Johns Hopkins this spring. Even though I threatened to return if they mess up (I understand a 23-year-old grad student has already designed an app to replace me), I attempted to impart some wisdom by suggesting to students that they place imagination and engagement over spreadsheets and surgically attached electronic devices. I invoked William Carlos Williams’s refrain “No ideas, but in things” and C. Wright Mills reminder, “that [social] discovery often occurs precisely when an imaginative mind sets itself down in the middle of social realities.”

At least college students listen politely, which is more than I can say for the rest of us. Just as technology keeps us physically apart, so does terminology—whether you’re on the Right or the Left. Increasingly, those who stake out extreme ends of the spectrum conform to idiosyncratic vocabularies, terms, and ideologies shaped inside echo chambers of their own making. Rather than expand the universe of diverse and interactive voices striving to be heard in a bustling marketplace of ideas, we have made the iconic 1967 Cool Hand Luke line, “What we got here is failure to communicate,” a present-day reality.

Sadly, our communication breakdown extends to the food movement where this year I saw too many dedicated and productive colleagues thrown under the bus due to an “incorrect” word choice or “failing to center racial equity” sufficiently within written or oral statements. I read how “we” at one food organization I formerly admired “uncover old vestiges and practices of white supremacy that must be uprooted.” I cringe at such language since it calls to mind events like China’s Cultural Revolution in the late 1960s and the Chinese famine several years before that. Tens of millions of deaths were caused by the termination of freedom of speech, the uncensored flow of information, and simple human respect (Yang Jisheng, Tombstone: The Great Chinese Famine).

Early this year the New York Times (3/20/22) released the results of a survey that found 84 percent of adults said it was “very serious” or “somewhat serious” that Americans do not exercise their freedom of speech for fear of retaliation or harsh criticism. Interestingly, the survey noted that liberals were more likely to retaliate than moderates or conservatives. In a NYT guest editorial (3/7/22) by a graduating senior from the University of Virginia, the author, Emma Camp, said “…my college experience has been defined by strict ideological conformity.” She cited a nationwide campus survey from 2021 that revealed 80 percent of students self-censoring at least some of the time. Over the past couple of years, my conversations with under-30s too often mirror this kind of lockstep, unreflective pattern, as if they are mimicking their professors and peers. Ms. Camp urged universities to do more “to foster appreciation for ideological diversity…and strong policies that protect expression in the classroom.”

None of this is say that there aren’t many thoughtful and necessary approaches to diversity, equity, and inclusion taking place among institutions and businesses, both large and small. When it comes to understanding the “real story” of racial oppression in this country, it’s impossible to learn too much. But when the food movement (or any social movement) is divided by thoughtless speech, especially when loaded terminology is hurled like incendiary bombs rather than as healing balms, a significant self-correction is due.

Of course, the Right trumps the Left when it comes to purging those they don’t like, misappropriating facts, and carefully managing their ministries of propaganda. Seized by moral paroxysm, groups like Moms for Liberty are trying to take control of local boards of education while opportunist politicians like Ron DeSantis pass anti-LGBTQ+ state laws. According to a great article in the New Yorker, the “Moms” are hell-bent on rooting out vestiges of systemic racism instruction from public school curricula, even when that instruction has little to do with critical race theory.

Am I hopelessly naïve to suggest that instead of “rooting” each other out—right or left—we need to become re-rooted in a common soil of justice, one that might be tilled with respectful and open debate? And in case anyone is wondering what book is currently on my nightstand, I’m reading John Rawls’ 1971 classic A Theory of Justice in hopes of gaining some clarity into a word whose meaning has been made murky by overuse and misuse.

As I think, so I write, which is why my blog posts for 2022 offer at least partial antidotes for the troubling trends cited above. By focusing on the thing—my way of presenting facts from as close as I can get to our common soil—I penned three pieces about people and places firmly embedded in their food system struggles (all of my 2022 stories can be found at Mark Winne: Community Food Systems and Food Policy). In Kansas City, Missouri I reported on the deceptive practices of Anton’s Restaurant and Taproom that was scoring unearned PR points with its overstated claims of using sustainably sourced animal products. In fact, it was using beef from its own slaughterhouse that had been shut down by USDA for inhumane practices. Anton’s was also exploiting loopholes in wage and labor laws to take advantage of low-cost, hard-working ex-felons against a backdrop of a state legislature hostile to living wages.

If you are still in need of living proof that climate change is real, take a look at my journey through the burned-out forests of northern New Mexico and the impact on poultry farmer Randy Cruz. The fire destroyed 342,000 acres of land including Randy’s house. Less than three months later, floods took out his and hundreds of other farmers’ pastures, fences, and roads. Randy’s tale of resilience is inspiring, but his story of endurance is what we need to know if we want our regional food systems to one day reach scale.

The last of my trilogy of people and places was my interview and dinner with Kentucky’s unofficial Minister of Sustainability and Soul, Jim Embry. A meal with this life-long food and civil rights activist is a sacramental affair where truth and wisdom are the main courses, and there’s always room for a little revelatory dessert.

Good food and good talk may feed my body and soul, but good books feed my mind. I had the privilege this year of sharing the news of four new food publications including the lovingly revised and brilliant From Partnerships to Policy: Promising Practices for Food Policy Councils (Center for a Livable Future) which I will confess to having a hand in writing. To learn more about the benefits of purple food, take a look at Purple Earth Cuisine by the masterful chef and the Pope of Purple, June Pagan. Want to learn 52 easy ways to eat well and live better? Check out RDN and mind, body medicine guru Theresa Yosuico Stahl’s totally digestible I’m Full! Need a new take on the perplexing problem of rural development from the Japanese perspective? I’d strongly recommend Kuni: A Japanese Vision and Practice for Urban-Rural Reconnection from the dynamic trans-Pacific duo of Richard McCarthy and Tsuyoshi Sekihara.

My piece on the White House Hunger Conference certainly got the most views of anything I wrote this year, which is not surprising. While I took the event to task for not positioning poverty and anti-poverty strategies front and center, I’ve softened a bit since then in light of the Biden Administration’s tenacious form of earnestness and persistence. As I keep telling myself and others, you work with what you got, make it better, and invent new solutions as required. Like tens of millions of Americans, I breathed a sigh of relief over the outcomes of the 2022 election. For the last two years I have sometimes felt like a participant in the opening scene of Saving Private Ryan where the American army is getting cut to ribbons on the beaches of Normandy. Maybe this new lightness in my step is deceiving, but Biden’s slow and steady approach appears to have seized the beachhead shifting the momentum in favor of democracy, sustainability, and that still undefined word, justice. Fingers crossed!

In a similar vein, I concluded a series with a blog about USDA’s Community Food Project Competitive Grant Program (CFP). My intent in turning the spotlight on several former and current CFP grantees (Missoula, MT, New Mexico, Lexington, KY, and Bridgeport, CT) was to demonstrate how a modest sum of federal funds can have a dramatic and long-term impact on community food systems. Gratefully, the National Sustainable Agriculture Coalition (NSAC) has included an expanded CFP initiative in its Farm Bill priority list. I urge everyone to keep an eye on the upcoming Farm Bill debate to ensure CFP’s inclusion and expansion.

And last but not least, and as a child of the Cold War, I had to weigh in on the Russian invasion of Ukraine. I’ve never liked bullies, so I was glad to see Biden standing up to Putin, which is why I couldn’t understand why so many Americans were whining over high gas and food prices. After all, the Ukrainians were dying by the thousands in defense of their homeland. Well, now, gas prices are down, the Ukrainians are pushing the invaders back, and I gardened with extra fervor this season.

But just when things are looking up, the heavens remind you who’s in charge. A late July hail and rainstorm, the likes of which I’ve never seen in northern New Mexico, blasted my garden to smithereens. Thinking that the 40 or so tomato plants I had nurtured to perfection were history, I resigned myself to buying tomatoes from the farmers’ market. Lo and behold, every single plant regenerated, either in defiance of or in accordance with Nature’s plan. The photo above of canned tomato sauce and mincemeat (green tomatoes are the base) attest to the unexpected and overwhelming late summer abundance.

May you ride 2023’s ups and downs with aplomb; stay open to differing points of view, but don’t be afraid to argue with grace and respect, and when absolutely necessary, draw a line in the sand. Don’t hide behind jargon and ten-dollar words. Seek to be understood, not to stand over others. Climate change is real, so when Nature acts up, roll with the punches. You never know what mysteries and marvels will turn up!