Early this spring it looked like I might have to lay off my booking agent and get a summer job. I got even more worried when I realized that my lifeguard certification expired in 1974, and that landscapers weren’t falling over themselves to hire the “aged.” Fortunately, a steady drip of speaking requests began to trickle in so that I was able to turn down that offer of a summer paper route. 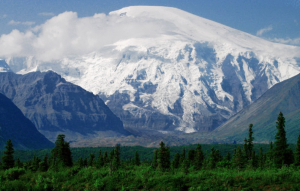 A gander at my appearances below reveals that I’ll have to forego breathing at least one day a week to earn enough carbon credits to offset my flying schedule. The good news is that when I’m not standing at a podium or cursing the power point projector, I’ll have some time to enjoy the company of friends and family, the mountains of Alaska, the beaches of the Carolinas and Jersey, and two rambunctious American/British grandchildren.

But let’s first take a look at some updates and a new item or two.

University of California Riverside student Melina Reyes deserves our praise and heartfelt sympathies for her 115-hour hunger strike to draw attention to campus food insecurity throughout the UC System. My April 25th blog post (Ramen U: Is This the New Meal Plan?) highlighted the growing problem of hunger at our nation’s colleges and universities and took academic and elected officials to task for their anemic responses. I also suggested that students might want to do more than establish food banks by showing “a little rage.” I don’t know if Melina read my piece, but according to the campus newspaper,The Highlander, she called on the University’s Chancellor Kim Wilcox to “halt future tuition increases” and to “use (his) position as Chancellor to bring student food and basic needs insecurity to the public eye….” The Highlander also reported that fellow students were overwhelmingly supportive of both her and graduate student Michael Gomez for their initiative, “to the point that (she) cried from joy and appreciation” at a press conference. (The California State Assembly recently passed three bills  that would assist hungry and homeless students.)

Looking for some summer food-flick fun? Allow me to put on my Johns Hopkins Center for a Livable Future hat and unabashedly recommend “Food Frontiers”.  This is a 35-minute production of CLF’s in-house filmmakers Leo Horrigan and Michael Milli that takes you on a lively journey from the Big Orange (Southern California) to the Big Apple telling uplifting stories of healthy food access and education. From supermarket development (Philly), to farm-to-school (San Bernardino), to rural grocery stores (Cody, Nebraska – pop. 149), to cooking education (Austin), to urban farmers’ markets (NYC), to a “food is medicine” pediatrician (Virginia), you’ll get a healthy look at bright ideas, bright people, and a brighter food future for everyone.

For those who read my November 18, 2015 post “Eat the Rich for Thanksgiving” but haven’t been able to wade through Thomas Piketty’s 653-page “Capital in the Twenty-First Century,” there’s good news. Various summaries, both print and e-versions, are available on-line (thanks to Michael Rozyne for pointing this out). My post includes a New Yorker quote from a Bernie Sanders campaign staffer who says, “I read a third of Piketty’s book. I don’t think Bernie would read a page of it.” I was reminded of this the other day when I heard a very smart food organizer say, “No one I work with reads; I can’t use more than two-minute videos.” And I remember feeling embarrassed in college when, on two occasions, I only had time to read the Cliffs Notes!

Last but not least, I want to give a shout-out to another book. It’s by newly-minted Ph.D. and Fulbright Scholar Alan R. Hunt, and the book is called “Civic Engagement in Food System Governance: A Comparative Perspective of American and British Local Food Movements (Routledge, 2015)” Now, academic titles like these don’t lend themselves to two-minute videos nor do they have Hollywood screaming for the movie rights. But what this book does do that others don’t (and let’s include films, blogs, Facebook, YouTube, Tweets, etc.) is to make it clear why food policy has only taken baby steps in this country. Hunt takes us on a well-documented journey through collaboration (and non-collaboration) among major elements of the food movement. He looks at the process on both sides of the Pond to reveal what’s worked, what hasn’t, and why. If you’ve ever wondered why America doesn’t have a national food policy, “Civic Engagement in Food System Governance” will provide you with many “Aha moments!”

Speaking of journeys, here are what mine look like over the next three months.

June 14 – 16: Anchorage, Alaska. Speaking at the University of Alaska and working with the Alaska Food Policy Council and local food policy councils. For more information, contact Elizabeth Hodges at ehodges4@uaa.alaska.edu.

June 22 and 23: Wake County (Raleigh), North Carolina. Speaking at the Wake County Food Summit (6/22) and the United Way of the Triangle (6/23). For more information, contact Erin White at erinsullivanwhite@gmail.com.

July 12 – 15: Baltimore, Maryland. Work with the Johns Hopkins Center for a Livable Future and the Food Policy Networks Advisory Committee.

Late August – Early September: Uffington, England. Leading a seminar with Grandchildren Zoe and Brad. Topics include: The Importance of Make Believe in a World Gone Mad; Why Staying in the Lines of Your Coloring Book is Not a Recipe for Success; Twelve Ways to Assemble a Proper Peanut Butter and Jelly Sandwich; Why You Say “Tow-Mah-toe” and I Say “Two-May-toe.”

Being on the road is hot and thirsty work. Please be in touch if you’d like to buy me a beer!