The blow to my head came out of nowhere. One moment I was turning down the bodega’s narrow 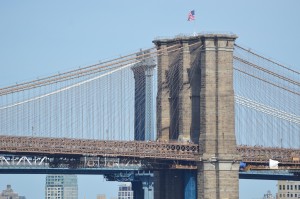 grocery aisle admiring the tidy merchandise display; the next thing I know I’m dazed and seeing stars. I look down at my outstretched hands holding the mangled frames of my eyeglasses and a case of Goya canned beans. “Dad, there’s blood on your face,” came the alarmed voice of my son who was giving me a tour of 5th Avenue in his Brooklyn neighborhood of Sunset Park. I dabbed at my right temple until my handkerchief was more red than white.

Why was I holding a case of beans, I wondered? The answer came from a chorus of Spanish voices, one of whom had been driving the dolly that collided with me. It was stacked so high with boxes he couldn’t see where he was going. With the instincts of an outfielder I had caught the full case as it flew from the dolly and ricocheted off my face. Apologies were not forthcoming, only a wad of paper towels from a clerk and fingers pointing the way to the “baño” to tend my wound. Such is the practice of emergency medicine Brooklyn-style when an earnest foodie is injured in the line of duty!

What had lured me into this shopper v. dolly incident in the first place was the stunning array of produce lining the sidewalks of 5th Avenue. Block after block of citrus, mangoes, and greens fronted stores abundant with attractive meat counters and shelves of non-perishables stacked to the ceiling in cramped spaces. The chatter and signs along the bustling sidewalks were Spanish, but three blocks east on 8th Avenue the food, signs, and chatter were Chinese. There, the street was redolent of seafood (some still panting), and bok choy tumbled out of every crate. If we had strolled downhill west of 5th Avenue to the waterfront, we would have encountered what my son described as a high-end, take-out food mecca frequented by Industry City’s hipsters and techies.

The cosmopolitan food experience (my glasses were repaired at “Cohen’s Fashion Optical” by its Chinese manager and his Latina assistant) can be disorienting and sometimes dangerous, but the pain can be worth the gain. Previously scarred by crime, this densely packed urban community had been possessed by what could only be described as a desolate food environment. Today, with the exception of an occasional flying bean box, it is safe and made vibrant by a dynamic food culture. 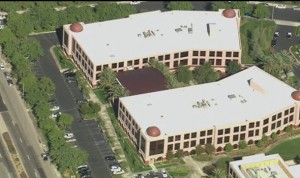 How much can food heal? That question is being put to the test in San Bernardino, California where I arrived one day after the latest NRA-abetted shooting left 14 dead and dozens injured. Among the wounded was a county health official who had attended an earlier meeting of the San Bernardino Food Policy Advisory Council. I’ve reported before on the good work of the SBFPAC and the thriving and throbbing Huerta del Valle community farm in nearby Ontario. I’ve also shared my agony and anger in this space when similar events took the lives of 26 people in Newtown, Connecticut, the state where I lived for 25 years. While food can do little to mend the shattered lives of the victims’ family and friends, there may be food system threads that tie a community’s suffering to hope.

The San Bernardino FPAC held its quarterly meeting on December 2, the day before the shooting, not far from the Inland Regional Center (shown here), the site of the rampage. The agenda reflected the plenitude and progress of the Council’s work including a robust discussion about how San Bernardino might adopt an innovative Orange County initiative called “Waste Not OC.” By using health inspectors to reach out to and educate restaurants and food retailers, Orange County is directing edible food away from landfills to sites that feed needy families.

To ramp up access to healthy food throughout the county (the nation’s largest by area), the FPAC, staffed and coordinated by the San Bernardino Community Action Partnership, has worked with dozens of food pantries to institute the Healthy Food Banking Wellness Policy. It has also spearheaded the expansion of summer meal sites across this region’s sprawling landscape. Over the past two years the results have been astounding. The food pantries now distribute over a million pounds of fresh produce compared to 170,000 pounds in 2013, and summer meal sites have grown from 87 to 197 in the same period. Writing of these achievements, Robin Ronkes from the County’s Department of Public Health said, “We are seeing remarkable results with the increased produce donations, supplying children and families with healthier foods.”

Reading between Ms. Ronkes’s lines, written two weeks after the shootings, I hear a tale of hope and resilience inspired by the work of thousands of hands and hearts. The county’s citizens are taking responsibility for the health and well-being of their neighbors. Good food, not weapons, will make communities like San Bernardino secure.

Turning from the wild and wooly streets of Brooklyn and the broken hearts of San Bernardino, 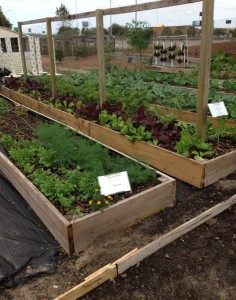 I light for a moment on another place where food has become a gentle elixir. I had a chance a while back to visit the North Florida School of Special Education which provides exceptional academic, social and vocational improvement experiences for 146 people between the ages of 6 and 22 with mild to moderate intellectual disabilities.

The school is as special as its children and young adults. Distinctive classrooms, a full training kitchen, gardens, aquaponics and greenhouse facilities, and a food truck unite this joyful place around a philosophy that places food at the heart of the academic and developmental experience.

There is an occupational thrust that drives the program as well. According to Sally Hazelip, the school’s executive director, “we want our graduates to be employed one day in meaningful jobs, so they do part time work on site.” This ambition, as she later told me, is to avoid the kind of placement where intellectually disabled people often find themselves, e.g. bagging groceries at Publix. Her vision is that the school can turn a disability into an ability that provides a rewarding life for the graduate at the same time that they contribute to the life of their community.

A stroll around the three-acre campus (soon expanding to nine acres thanks to a recent land donation) clearly identifies that path. Berry Good Farm is the name given to the growing spaces that include raised beds (shown here) and low-tech, small-scale food production infrastructure. The farm was developed by its manager, Tim Armstrong, who was inspired and trained by the Food Revolution’s own Will Allen. Tilapia from two fish tanks find their way into the school’s Spring Fish Fry Fundraiser (about 20 percent of the school’s income is self-generated revenue). A food truck with food grown in the garden and prepared in the school’s culinary program makes its rounds to Jacksonville businesses, food truck courts, churches and private functions. And from seed to table, the school’s young people are cultivating, chopping, learning, selling, and earning their way into Jacksonville’s food system.

Healthy food is our understated salve. When forces we can’t control shatter our lives or disrupt our communities, it has the power to bring people and places together, and to return vibrancy and meaning to our existence. As we step briskly into 2016, let’s uphold the power of food to make us whole again.